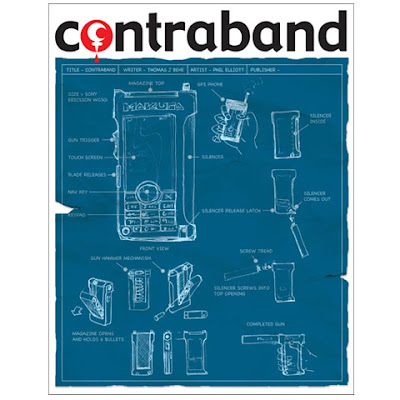 UK co-creator Phil Elliott, whose also work includes Tupelo and Illegal Alien, was approached on the street by a teenage girl asking for money. It's a sad but common enough occurrence in cities, but when Elliott refused, the situation became something much different from anything he'd experienced.

"A younger kid -- he must have only been about 10 -- started swearing at me, 'Give us some ******* money!'" he recalled. "I was then aware that there was another girl filming all this on her mobile phone. What was going on here? Were they trying to provoke me? What happened to the video?"

The incident took on a greater significance for Elliott when writer Thomas Behe contacted him to see if he were interested in drawing a story he'd written. That book became Contraband. Behe was inspired to write the story after he noticed that people's concerns about cell phones had shifted from the physical dangers, such as radiation or tumours, to more cultural concerns.

"The new concerns were more social-related," he said. "Kids receiving intimidating texts from class bullies. A mate of mine was even propositioned to subscribe to some sort of spy-cam exhibitionist mobi-blog. I had no idea why these folks were secretly filming everyone, but there was tons of stuff on there."

In the near-future society of Contraband, bands of content-hungry amateurs armed with camera phones record violent scenes, some of which they instigate, to satisfy society's demand for ever more shocking on-the-go entertainment. Toby, a self-styled "citizen journalist," is
documenting this underground when he is discovered by agents for a cell-phone channel called Contraband. Forced to work for them, Toby is assigned the task of finding a female activist set on sabotaging Contraband and must navigate a difficult path where he must choose
between his own safety and the greater good.

• Contraband is a 144 page black and white graphic novel written by Thomas Behe and illustrated by Phil Elliott. Published by SLG Publishing and due for release in February 2008, Contraband (Isbn #978-1593621018) is available from amazon.co.uk.

• For more information about Contraband go to www.contrabandcomic.com.
Posted by John Freeman at 3:52 pm

Email ThisBlogThis!Share to TwitterShare to FacebookShare to Pinterest
Labels: Books