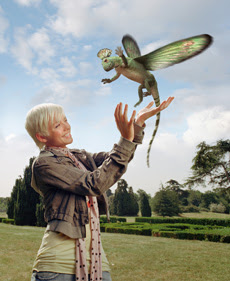 Primeval actress and and former SClub 7star Hannah Spearritt has put a stop to "panty scenes" in the show's second season.

The actress, who plays reptile expert Abby Maitland in the ITV1 drama (but spent much of the first episode in the new season knocked out as the team battled deadly raptors in a shopping mall), told the Daily Star she didn't feel the show needed any more of what appeared to be her character's constant underwear scenes.

"I thought the clips of me wandering around in my pants last year were a bit much," she told the paper. "The thing is, this was already in the script when I got the part and I didn't think too much about it at the time.

"We filmed the scenes [for the first season] all in one block," she revealed. "But the actual clips got spread across the series so it made it look like I was walking around in pants all the time. When we watched it back, we were quite shocked. I say 'less is more'. We don't need it for the show."

She added: "If you want to see hot naked flesh, then the lovely James Murray, who plays Stephen, gets his top off!"

Despite the change, Hannah still has an army of loyal fans delighted by her acting work rather than her pants. Good for them.

The new season has had a reboot explained by changes in the timeline (emphasizing the dangers of messing with the past), with the actress Lucy Brown, previously a Home Office liasion now a ruthless PR manager assigned to keep the activities of the Anomaly Research Team, which now has a nifty HQ inspired by the home of a well known Hammersmith-based publishing house, but still in the dark as to the cause of the anomalies that are dropping dinosaurs from the past into the present.

Next week's episode will see the PR guru locking horns with Cutter while Connor’s potential new love interest, Caroline (Naomi Bentley), gets Abby hot under the collar. But is her interest for real or does she have an ulterior motive?

As we reported a few days ago, the ratings success of the show and strong 100,000-plus Season One DVD box sets sales have resulted in early merchandising from the show. Titan Books are to release a series of novels, the first titled Primeval: Shadow of the Jaguar (released on 21 March 2008), plunging Cutter and the team into the Peruvian rain forest for a thrilling prehistoric ride. A Primeval comic is also in the works, drawn by Neil Edwards.

Aside from some glaring continuity errors (particularly disappearing guns between scenes) this is a fun show and the reboot seems to have put the show on more solid ground and is setting up some strong character relationships. Let's see how it goes.