One of the most successful original graphic novels of 2007 was the Alan Grant and Cam Kennedy adaptation of Robert Louis Stevenson's Kidnapped. This was created for the One Book One Edinburgh reading campaign in Scotland's capital in February 2007. The graphic novel, in which Grant used as much of Stevenson's original language as possible, was also published in modern English, Lowland Scots as Kidnappit, and Scots Gaelic as Fo Bhruid, thereby predating the similarly styled Classical Comics literary titles.

The Down The Tubes report on the 2007 Kidnapped graphic novel is here. 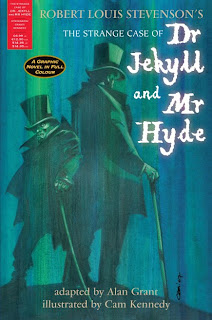 The success of the reading campaign in Edinburgh in 2007, and of the graphic novel in the wider world, inevitably lead to a follow up for 2008. This year we can look forward to Grant and Kennedy's version of The Strange Case Of Dr Jekyll and Mr Hyde which is, of course, set in Edinburgh.
A new version of the full text novel with an introduction by crime writer Ian Rankin, as well as the new graphic novel version, will be launched on Thursday 21 February at a special event at the Jekyll and Hyde pub in Edinburgh's New Town followed the next day by 10000 copies of the full novel version given away free to Edinburgh's citizens.
Both versions of the book will also be available for the wider world to buy through the normal outlets and again there will be four different text versions. Unlike last year with Kidnapped, this year's new version of the full original text novel will also feature a cover and interior illustrations by Cam Kennedy.
To tie in with the release of the new graphic novel, Alan Grant and Cam Kennedy will be attending the Book Launch and on Saturday 23 February they will be at the National Library of Scotland in Edinburgh for a talk on the creation of the book.
These appearances are in addition to Alan Grant's Edinburgh Lecture on Tuesday 29 January and both Alan Grant and Cam Kennedy's attendance at the Hi-Ex Comics Convention in Inverness on the weekend of 2-3 February.
Posted by Jeremy Briggs at 6:56 pm