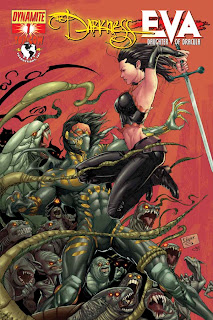 Hot on the heels of the release of Space Doubles #1 from US publisher Th3rd World Studios (a five-issue mini-series in a flipbook format, emulating the old Ace doubles paperbacks) and the Raise the Dead hardback from Dynamite Entertainment which should be coming early this year, British writing team Leah Moore & John Reppion have anounced a couple of other projects they'll be involved with over the coming months.

The Darkness/Eva - Daughter of Dracula is a four-issue mini series Dynamite has confirmed will continue its “Eva” property (though now re-named “Eva: Daughter of Dracula”) in March, when the character will crossover with Top Cow’'s computer game-inspired tie-in The Darkness, marking the two company'’s second such collaboration.

The project will be written by Leah Moore and John Reppion, with art by Edgar Salazar, and covers by Brett Booth, Salazar and Paul Renaud.

Image Comics has also announced Comic Book Tattoo, an anthology which will feature stories inspired by Tori Amos songs edited by Rantz Hosley and scheduled to be out in time for Comic-Con International. Leah and John will be collaborating with Y the Last Man artist Pia Guerra on a story for this mega huge book.
Posted by John Freeman at 1:25 pm