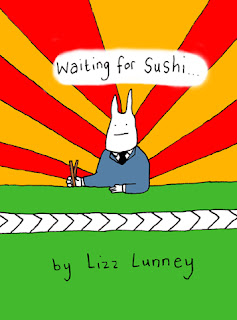 Cartoonist Lizz Lunney, whose 'Burger Love' strip was shortlisted for the 2007 ROK Comics Humour Competition, has two new comics on sale via her web site (www.lizzlizz.com)

Waiting For Sushi is a 32 page A6 comic with colour cover containing lots of mini cartoons with characters such as Hairy Midget Elf, Leaning Rabbit, Burger Love and The Boy with Living Ears!

"This first edition of this comic is now sold out," says Lizz, "but a second edition is now available. " This new version features three new cartoons - Melon Boy!, Fat Pigeon and Smelly Pigeon! and What to do if your Hair is on Fire!

Party Animals is a black and white 16-page mini comic featuring exciting little cartoons and ew characters such as My Mate Primate, Disco Rabbit and Troy the Talking Chair! This comic comes with a free random badge. 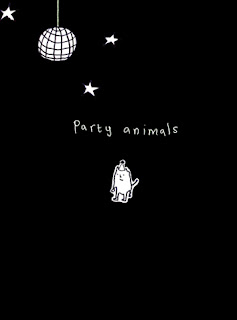 Hailing from Birmingham in the UK, Lizz studied Animation at a University "in a little town in the middle of nowhere.

"I soon discovered animators spend too many hours alone in the dark drawing the same picture slightly different millions of times with very little reward (except insanity) and so I developed an interest making fake taxidermy squirrels and puppet animation which is much more fun," she says. "Since then I have concentrated on cartooning again,

Her next comic will be Zine Arcade which she sells us which again features her characters, Smelly Pigeon and Fat Pigeon.

To buy either comic visit: lizzlizz.com/store5/agora.cgi
Posted by John Freeman at 5:28 pm