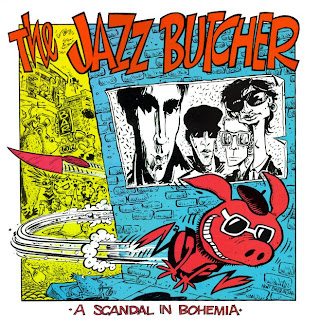 Have you ever bought an album for its cover? When it was released way back in 1984, Hunt Emerson's energetic, enthused art for Jazz Butcher's Scandal in Bohemia was what caught my eye, and persuaded me to hand it over to the staff in the (sadly long gone) Ear Ere Records store in Lancaster and ask for a listen.

I was hooked (the Emerson cover a definite plus). I followed Jazz Butcher via their albums through the 1980s and once caught them live at a gig in London when I was working there (somewhere off Euston Road, I think).

As a review of the band over on music download site emusic recounts, The Jazz Butcher was the vehicle of prolific singer/songwriter Pat Fish, described by them as an archetypal British eccentric whose sharp observational wit and melodic gifts navigated the group through over a decade of constant line-up shifts, stylistic mutations and even a series of name changes which found the band performing variously -- and apparently randomly -- under such titles as The Jazz Butcher Conspiracy and the Jazz Butcher & His Sikkorskis From Hell.

But every time I mentioned Jazz Butcher when the matter of favourite bands came up, it was rare that anyone had heard of them (in fact, I think it was only Nick Jones at Titan Books who ever named one of their albums). Strange, considering they only disbanded in 1995.

Well, that's all going to change, surely, because not only is a lot of the Jazz Butcher's back catalogue now available via emusic, I've just found the band's official web site and JB Pat Fish's MySpace site. So, go check them out. And I still rate Scandal in Bohemia as a fab album!
Posted by John Freeman at 8:48 am