ROK Comics has announced the winner of its first $10,000 humour competition as cartoonist Steve English, for an episode of his ongoing series "Madd Science".

Runners up in the competition, which ran on ROK Comics this summer and attracted hundreds of entries, were David Hailwood and Toshiro de Smeyter for and episode of their strip "Drink Like a Fish" and Paul Eldridge, who used the ROK Comics Creator Tool to produce a strip entitled "The Secret of Stonehenge".

Steve won the $10,000 overall prize while the runners up will receive 12 month subscription to ROK Comics.

"The standard was very high, and the different approaches to a inherently restricted art form, such as the 'three picture' strip cartoon, were refreshing," commented Alan.

"I wouldn't be surprised if one of the contributors who made the shortlist managed to make a breakthrough into the world of cartooning - and it might not necessarily be the most obvious entrant who does."

As the Managing Editor of the ROK service, I have to say I've been hugely impressed by thethe huge range of entries we had to the competition, especially given this is a fairly new medium for comics. There was much umming and ahing in the office to get down to a shortlist. 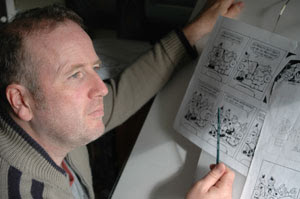 Commenting on his win, Steve English (right) said: "It's fantastic. The last time I entered a cartoon competition I only won a pizza!”

"It's nice to know that when you're staring at a blank page and banging your head against a wall waiting for an idea to drop out, sometimes something lands in your lap that makes others laugh too.”

"I'm torn between cashing in the cheque and framing it as proof that I made the editor of the Beano smile... No I'm not – a framed bank receipt will do the job just fine."

ROK Comics will be running more competitions in future.
Posted by John Freeman at 9:09 am