(This post last updated 27/8/07, with thanks to Richard Sheaf and Derek Wilson): Information on Virgin Comics Dan Dare title due in November and news on a film project has begun to emerge.

The new Dan Dare comic will be written by Garth Ennis and drawn by Gary Erskine that, as downthetubes reported earlier in the year, sounds more in keeping with the character's 2000AD incarnation that the original Eagle character, operating in a world where post-nuclear warfare has destroyed North America and much of Asia, leaving the UK as the world's last remaining superpower.

Gary Leach will be providing covers to the first seven issues. (The PR image featured here is by Bryan Talbot).

Here is the press release from Virgin Comics in full:

Aviator and entrepreneur Sir Richard Branson today announced that Virgin Comics (www.VirginComics.com) will be bringing legendary super hero Dan Dare out of retirement and back into the outer reaches of the galaxy, with an all new Dan Dare comic book series. The new series will be published monthly beginning November 2007 and will be written by legendary comic author, Garth Ennis (author of Preacher, The Boys, Hitman, John Woo’s Seven Brothers and other acclaimed and best-selling titles). 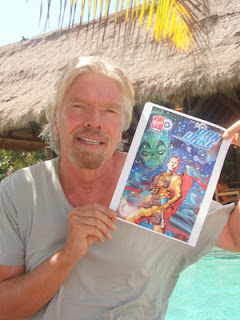 Dan Dare has been an icon since 1950. Elaborate stories of his space travel and galactic battles defending people of the universe captivated post-War baby boomers. Dan Dare’s adventures burst to the forefront of pop culture, selling nearly one million copies each week in the pages of the Eagle Comic.

“Dan Dare is an heroic, thoughtful and fiercely independent character; I was an avid reader of his epic journeys. It is a pleasure for Virgin Comics to be involved with such a legendary character – one of the original great aviators” said Sir Richard Branson.

“Dan Dare is the real original Super Hero. In the 50’s, on the front page of The Eagle, he was selling one million copies a week. Today, his impact and appeal to readers across the UK and around the world can be even greater with Virgin Comics. This is a perfect partnership.” said Colin Frewin, CEO of The Dan Dare Corporation. “Superman, Batman and Spider-Man beware – Dan Dare – Pilot of the Future is back to protect us all.

Virgin Comics’ Dan Dare is set in the future, albeit not too many decades from the present day. Colonel Dare is still vibrant and courageous – but now he’s retired. His retirement is a self-imposed exile, the result of his disgust with politics and the post-nuclear warfare that has destroyed North America and much of Asia – leaving the UK as the world’s last remaining superpower.

Readers familiar with Dan Dare stories will recognize many of the original cast including a wiser and more experienced Digby; the innovative, brilliant and beautiful Professor Peabody; and of course the enemy of all that is good, the super-intelligent ruler of the Treens – The Mekon, together with a mix of galactic evil beings.

“Dan Dare and Virgin are a perfect combination – two iconic UK brands. We are thrilled to be working with Colin and Garth to redefine this quintessential character for a new generation of readers around the world.” said Sharad Devarajan, Virgin Comics’ CEO.

“Dan Dare + Garth Ennis = AWESOME,” explains Gotham Chopra, Virgin Comics’ Chief Creative Officer. “There’s not much more to say because this is a combination that doesn’t require hype – great comic heroes plus great comic writers equal a great time for all of us. Expect nothing less."

Additional plot info indicates that Dare returns as trouble musters in Deep Space. The H.M.S. Achilles is picking up strange signals when, suddenly, an enormous fleet of hostile ships ambushes the destroyer. As the crew struggles to stay alive, they realize with horror that the hostiles have brought a weapon of unimaginable power. Dan Dare, pilot of the future, has been called out of retirement.

Dare -- described by some US news sites reporting the story as "Britain's version of Buck Rogers" -- has long been a favourite of Virgin's Richard Branson (he's even displayed artwork from the Dare comic series in Virgin Atlantic Airways lounges), who led the effort to acquire the publishing, TV, movie and video game rights to Dare from Eagle owner Colin Frewin, whose Dan Dare Corporation created the recent animated version of the character.

Variety (subscription required) reports Virgin is in the process of finding the right director, writer, and producers to work on the film version of the project, with the Creative Artists Agency packaging the potential film and meeting with clients about the project.

For those who played one of the Dan Dare computer games in the late 1980s may remember that they were made by... Virgin Games!

Commenting on the news, Dan Dare fan and downthetubes contributor Richard Sheaf says of the preview cover: "The knife and the (presumably) ammunition holders signify this may be a version of Dan who no longer uses the ol' paralysing pistol. A violent comic from Garth Ennis, who'd have thought it?

"The naval look to the ships is a new interpretation for the Dan Dare universe but looks fine. And the Mekon lurking in the background is an essential touch.

"I'm not clear whther this is an on-going comic or a mini-series (I assume the latter) but like the fanboy I am I'll be buying all the issues," he added. "The press coverage that this should generate for Virgin should raise their profile in the UK. Check out the papers tomorrow to see if our hero gets a mention (Dan Dare, not Branson!)."
Posted by John Freeman at 12:03 pm

Now that we have a bigger version of Bryan's great image is anyone else thinking of Space Cruiser Yamato?

There is a nice model picture of the Yamato spaceship here -
http://www.starshipmodeler.com/yamato/yamato.htm
and Wiki has more details of course -
http://en.wikipedia.org/wiki/Space_Battleship_Yamato

Meanwhile the spacefighter(?) at the bottom of the image has the cockpit of a World War II Spitfire.

Very interesting, and I'll definitely pick it up, but the news seems to ignore the fact that Dan Dare has been back for several years in the pages of Spaceship Away!

I loved the 2000AD version, so I'm very happy about that.

Day2Day Trading are proud to announce that they hold the Worldwide license for Dan Dare Action
figure and collectibles. We are designing and manufacturing, marketing the original Dan Dare from the
Eagle comics starting from the 1950s as an action figure 1/6th scale. For more info on and updates on
release date please visit www.day2daytrading.com
THE PILOT OF THE FUTURE IS RETURNING