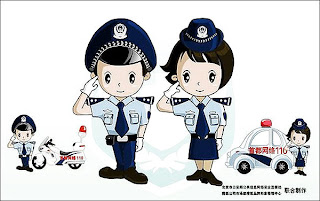 It had to happen - while fuddy duddy Britain enforces copyright protection through dull sounding organisations such as the Federation Against Copyright Theft, the Chinese government has gone all 21st century and introduced animated copyright police characters that will patrol the web there.

From 1st September, animated beat cops will patrol thirteen of China's top Web portals in an effort to steer some 137 million internet users in the country away from illegal content.

Pictured here are is an image released by the Beijing Public Security Bureau who will soon begin patrolling the web using these animated beat cops which will pop up on a user's browser and walk, bike or drive across the screen warning them to stay away from illegal Internet content and material "the Communist Party finds politically or morally threatening."

By the end of the year, the animated warning will appear on all websites registered with Beijing servers.

The Washington Post reports that China stringently polices the Internet for material and content that the ruling Communist Party finds politically or morally threatening. The government also routinely blocks surfers from accessing overseas sites and closes down domestic Web sites deemed obscene or subversive. But despite the controls, nudity, profanity, illegal gambling and pirated music, books and film have proliferated on Chinese Internet servers.

Designed by leading Chinese web firm and search engine Sohu, the male and female cartoon characters are meant to startle users and remind them that the government is monitoring Web
usage. Additionally, if surfers need police assistance, they can click on the characters, which link to the police authority's website.

So, what would British copyright police look like? How about this Judge Dredd-inspired design from top illustrator Gary Hall, which he sent us earlier in the year?
Posted by John Freeman at 9:36 am