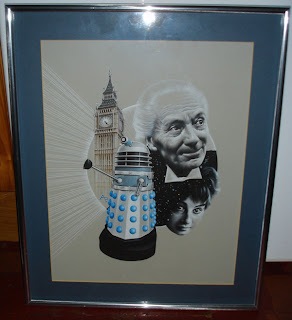 Doctor Who and Dalek fans reading this blog might like to know I have just begun an ebay auction of Alister Pearson's original artwork for the 1990 Target Book and BBC Video Dalek Invasion of Earth.

The painted artwork measures 49 x 37 cm in frame. The art was originally used on the BBC Video release.

The "On Target" web site notes the art originally did not feature Big Ben, but BBC Video requested the famous landmark be added. Alister kindly gave this to me on my departure from Doctor Who Magazine but I no longer have a place to hang it. It was my idea to make the time on the clock (checked with Andrew Pixley!) the time of the screening of the original brodcast of the show.

And yes, that is my fridge.
Posted by John Freeman at 9:41 pm

Email ThisBlogThis!Share to TwitterShare to FacebookShare to Pinterest
Labels: Auction News, Doctor Who