Prisoners of Time: An Interview with artist Gary Erskine 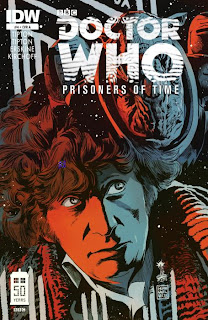 IDW's yearlong celebration of Doctor Who’s 50th anniversary Prisoners of Time features the work of many British creators, with Phillip Bond providing art on Issue 5, on sale soon. Issue 4, the Fourth Doctor issue, was drawn by Gary Erskine, with assist from Mike Collins.

Put on your scarves and munch on some jelly babies, as we talk to Gary about his work on the fan-favourite Fourth Doctor...

downthetubes: Prisoners of Time is, I believe, the first time you have drawn an official Doctor Who strip - although you were commissioned to draw some illustrations of the Fourth Doctor for Doctor Who Magazine some 20 years ago. Is he your favourite Doctor?

Gary Erskine: Technically my first Doctor was Jon Pertwee with [Sarah Jane Smith] and Planet of the Spiders but my first vivid memory was the end of that particular episode and his regeneration into Tom Baker. He made for an astounding debut and was crazy as Hell. Leela proved a very memorable companion too and their episodes remain my favourite part of childhood television. 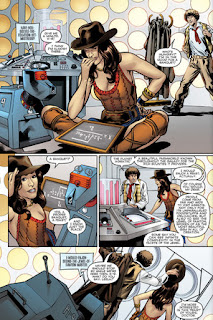 Gary: My episode of Prisoners of Time features Leela [in her classic leather outfit] She was always a favourite companion and I was fortunate to meet Louise Jameson in Edinburgh around the early 1980s when she was filming The Omega Factor at Edinburgh Zoo. I was twelve years old at the time and on a school trip and she was very sweet. I had such a crush on her too and could barely speak.

Gary: I have worked on a number of comic book licenses before and the likeness capture always proves a tricky area. The main area we had to concentrate on was the balance between Tom Baker's quirky and individual appearance and the delicate beauty of Louise Jameson. Not always an easy task and there was a lot of BBC approval edits and changes over the course of producing the book. It goes with the territory of working with licenses and actor/agent approval but we were very pleased with the end result.

Gary: Not really. I love Doctor Who and any opportunity to work with the characters was welcome. The Judoon make an appearance and they have proved a new favourite alien species for the series. Leela's interaction with them is particularly memorable but saying anything more would be a spoiler. 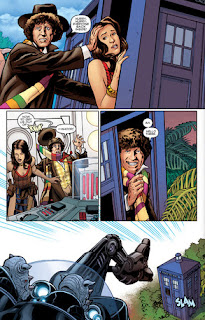 downthetubes: you've also drawn another great British SF hero, Dan Dare - are there any other British heroes you'd like to tackle given the chance?

Gary: I remember an old Sydney Jordan story called Lance MacLane which was serialised daily in the Daily Record in Scotland for years in the late 1970s to 80s. It followed on from his work on Jeff Hawke and had a European sci-fi vibe to it and I really enjoyed following it. Several artists worked on the series and would change almost daily but the stories were fun and entertaining. I would probably wish to reboot that character somehow if the opportunity arose.

Gary: Doctor Who works because it is good wholesome sci-fi with clever story-telling featuring likeable characters. It is a combination that has proved (nearly) timeless.

Everyone seems to have an affection for a particular Doctor but very much like James Bond, the overall legacy remains strong and the audience will always be there for the show (in whatever form it takes). I look forward to more. 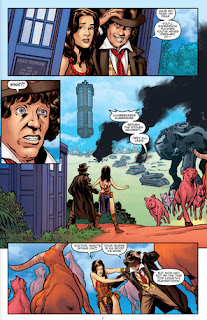 Gary: Sylvester McCoy's portrayal of the Doctor always intrigued me and Ace proved herself to be a feisty companion. I would hope to work with them at some point but a longer return to Tom Baker (with either or both Leela and Sarah Jane Smith) would be a sweet opportunity. I might pester my editor Denton Tipton and the writers Scott and David Tipton later this year and see what we can come up with?

I have a wee idea of a story that could work quite well. I can say no more at the moment.

downthetubes: You have your own 'franchise' you're working on right now, The Roller Grrrls - can you tell us what that's about and your plans?

The Roller Grrrls project is something my colleague Anna Malady and I have been working on for over 18 months now by building up an audience and trust with the roller derby community to create an on-going serial featuring the girls in a local league.

Part soap opera, part sporting comic, Roller Grrrls actually references an earlier comic legacy of British comics such as Tiger, Champion, Action and other boys comics where sporting scenarios and characters were the popular focus, which featured football stories and strips like Roy of the Rovers, Hot Shot Hamish and Billy's Boots. Elsewhere there was Formula 1, wrestling, boxing, speedway and many other sporting stories. Even Action  and 2000AD gave a nod to the reading audience's interest in sport with the Harlem Heroes, Speedball and Inferno stories. 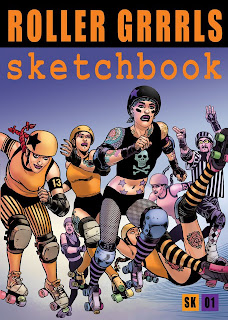 Girls comics too would feature sporting activities like hockey or netball and we are hopefully echoing that previous trend and pushing it to a new audience [both comic and roller derby fans] with Roller Grrrls. Granted, some of the themes we will be tackling involve more mature themes but the spirit of the earlier comics is still there.

I am also working up Incendiary.US which is an apocalyptic road movie (The Driving Dead?) and a horror western called Zachariah Gunn: Dakota, with colleague Dominic Regan, which references Once Upon A Time In The West and Hellboy. Both are to follow later this year after the Roller Grrrls launch in July. Stay tuned and follow them all on Facebook!

• Buy Doctor Who: Prisoners of Time #4 for iPad, iPhone and iPod Touch
Posted by John Freeman at 6:00 pm