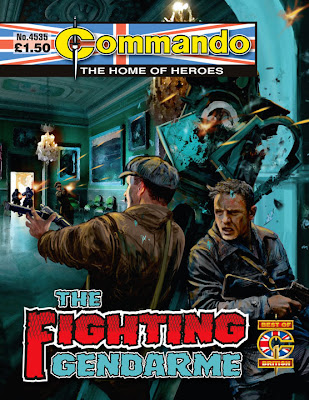 There's a fine mix of old and new to the latest Commando releases, on sale today in all good newsagents and for iPad and other IOS devices.

A Gendarme, a French policeman. That's what Raoul Laurent was when World War II broke out. Sergeant Laurent decided he wasn't going to bow down before the occupying Nazis, escaping to England to join the Free French Forces and become a Commando.

In time, Raoul was selected for a dangerous mission back in his homeland, helping the French Resistance to locate and destroy vital coded documents that were in Nazi hands. To succeed, though, Raoul would have to rely upon an old adversary from his police days. Not only that, pretty soon it looked like his new allies had a traitor in their midst... 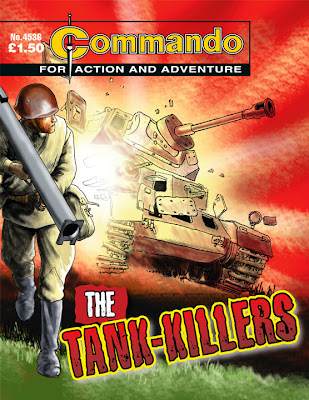 Tank, panzer, char d'assault, tahk. Call them what you will, these armoured giants struck fear into all infantrymen who faced them in battle.

Not quite all, though. This is the story of four men brought together by the fates of war who challenged the metal monsters and called themselves... The Tank-Killers! 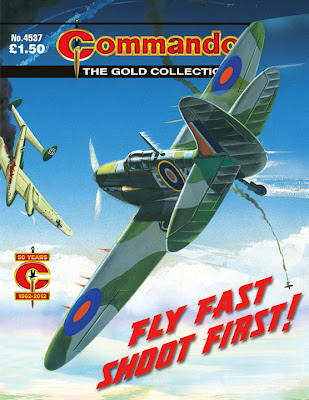 The machine-guns chattered their chant of death, the Spitfire spat its eight-forked tongues of flame - and from the wide blue sky tumbled another charred fragment of the once-mighty Luftwaffe.

Mike Arden was a flying fool: a pilot with only one fault. In his eagerness to get into a fight he left more than burned-out Nazis behind him - he left a trail of broken Spitfires too!

So they gave him a choice: Transfer to Coastal Command or stay on the ground.

Mike transferred - and did things with a four-engined bomber that had never been done before!

"I hope nobody minds that I've dipped into 1961 for a story to give a fresh airing but this one really does deserve to be seen again," notes editor Calum Laird of this latest representation of a classic story from Commando. "It's one of very few Commandos to have been written and drawn by the same person and it shows - some of the full-page illustrations which pepper this book are little masterpieces all on their own. If the narrative comes off second-best, it's only because the art treatment is so accomplished.

"Oh and there's no truth in the story that Ken Barr's excellent cover features a Spitfire only because we couldn't fit a Liberator in the space." 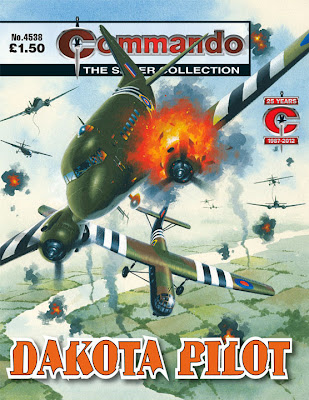 For Ben Smart, Dakota pilot, things had been going badly. Bad luck seemed to follow him wherever he went, and always managed to strike where it could do the most damage.

And this time, of all places, it had to be the terrible battle of Arnhem

"As usual, Ian Kennedy has done Commando proud with his stunning front cover," notes Depurty Editor Scott Montgomery, "producing an amazing image - a snapshot telling you everything you should expect from the story that appears in between the front and back pages.

"Aerial action and thrills abound, of course, but there's also a solid, character-driven story - by writer Bill Fear and interior artist Terry Patrick - about a pilot who believes he is jinxed and wonders if he's a danger to himself and his comrades.

• Steadfast! the Commando artwork exhibition at The Gordon Highlanders Museum in Aberdeen runs until 30th November 2012. There are more details about the exhibition on the museum website.
Posted by John Freeman at 1:30 pm