Madefire extends its digital comics app to iPhone and iPad 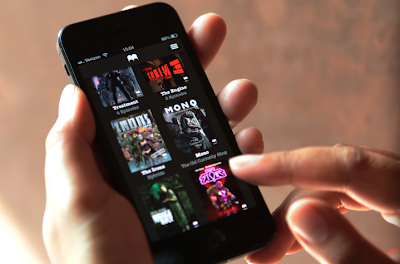 Digital comics publishing house Madefire - co-created by British comic creator Liam Sharp - has announced a major update to its revolutionary comics app, bringing it to iPhone and iPod touch for the first time.

The Madefire app, which delivers a fully-immersive, episodic comics reading experience, is now optimized for the four-inch Retina display on iPhone 5 and supports Facebook single sign-on in iOS 6. The app is also available for iPhones 3GS, 4, 4S, and for third and fourth generation iPod touch. 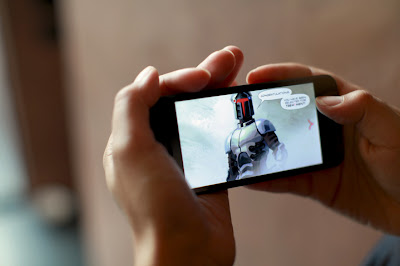 Madefire says it is also growing its catalogue of free titles and weekly releases of new episodes, giving readers even more opportunities to explore 'short-burst' reading.

We've downloaded a couple of stories here at DownTheTubes and it's looking slicker than earlier versions, although we're still not convinced by the size of lettering on the iPhone screen or some of the storytelling decisions when it comes to presenting speech balloons, for example - but there's no doubting the art is gorgeous and we're intrigued by the upcoming beta testing of its Motion Book Tool, which has apparently been heavily oversubscribed in terms of creator interest.

As part of Madefire's commitment to democratizing digital publishing within the visual storytelling space, the company is making this browser-based Tool -- on which all Madefire titles are built -- available to creators through a phased release.

The app includes a new 'Feed' feature, which gives readers an inside look into Madefire titles and creators, with special features such as 'The Making of' and sneak peeks of upcoming releases.

"We received a tremendous response for Madefire on iPad and wanted to bring this amazing content to millions of iPhone or iPod touch users around the world," said Madefire co-founder Ben Wolstenholme. "Plus, with iPhone 5, users will now be able to experience their favorite episodes and stories on the beautiful, four-inch Retina display."

"Feedback about Madefire has been extraordinary," said Dave Gibbons, Watchmen co-creator and author of the original Madefire series 'Treatment.' "As a content creator, I am excited to bring my new stories and characters to iPhone and iPod touch users around the world via the Madefire app."

Madefire says it is currently the only publisher offering episodic, digital stories in an immersive Motion Books format. Content creators include world-renowned comic and graphic novel artists, as well as up-and-coming artists.

Founded in 2011 by Ben Wolstenholme, Liam Sharp and Eugene Walden, Madefire is backed by True Ventures, with angel investors including Sina Tamaddon, former Senior Vice President of Applications for Apple Inc -- who sits on Madefire's Board of Advisors.

The Board of Advisors also includes industry leaders like: Toni Schneider, CEO of Automattic (the company behind WordPress.com); Mike McCue, CEO and Founder of Flipboard; Dave Gibbons, co-creator of Watchmen, the bestselling graphic novel of all time; and Bill Sienkiewicz , widely recognized as one of the greatest innovators of sequential art.

• For more information go to madefire.com, or download the Madefire App for iPad, iPhone and iPod touch from www.madefire.com/iOS