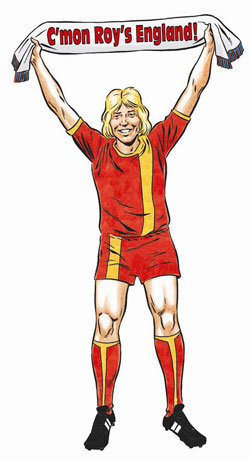 Egmont has launched its new digital Classic Comics imprint with four iBooks collecting some classic Roy of the Rovers stories.

Egmont says it will be distributing a broad programme of iBooks and e-comics, and with a huge amount of comics material in its archive, the possibilities are broad given their ownership of material from titles such as Battle, Misty, Whizzer and Chips and Tammy, to name but a few.

Any comic character published for the first time by Fleetway Editions since 1970 - other than characters sold to other companies such as those that featured in New Eagle, which are owned by the Dan Dare Corporation - could now see new life in digital form.

Let's hope it's a success and sees new strips added to the mix at some point.

Roy Race first started appearing in the weekly comic Tiger in 1954 and has always been the character Egmont have used to push open the doors with new developments for their archive material.

David Riley, Managing Director, Egmont Publishing Group, commented: “We are very proud of the iconic comics in our archive and digital publishing allows us to bring them back for fans, old and new, to enjoy.

"We are excited about launching with Roy of the Rovers and feel that 2012 is an appropriate year for Roy to make his triumphant return. From Melchester, to Poland and the Ukraine, football fans will be cheering for Roy this year!”

Fans of Roy of the Rovers can also check out a new look to the official Roy of the Rovers website , with Egmont saying they plan to use it to bring Roy’s world of high drama to life, "with a variety of great content". Fans can follow all the action though Facebook, Twitter @Royofthe_rovers and through the weekly blog on the website.

Egmont have also announced they will release a host of other Roy merchandise later in the year.