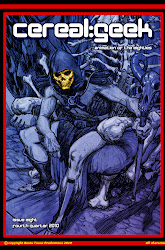 The latest issue of Cereal Geek, devoted to animated shows of the 1980s, is now available.

Priced £6 in the UK, Issue Eight continues the theme from the previous issue, showcasing the many animated movies of the eighties; both series-based and studio-produced.

The numerous five-part stories that featured in many cartoons of the eighties are addressed in this issue, the He-Man and She-Ra movie The Secret of The Sword receives an in-depth article, including never-before-seen development artwork.