Latest Commandos Have A Chilly Theme 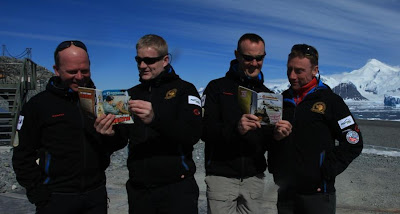 DC Thomson were one of the sponsors of the expedition and, as can be seen, supplied the team with Commando comics to keep them entertained. We are pleased to say that the expedition successfully achieved its objectives and returned safely.

Looking at this photo it seems somehow appropriate that two of the Commandos in the current batch are entitled War In The Snow and The Fighting Penguins. 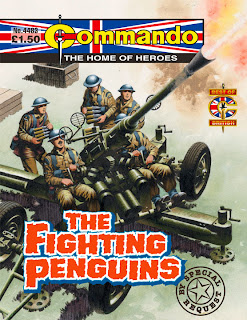 The RAF Regiment was formed during the Second World War. Its purpose…to defend airfields in the event of attack from the air or from ground forces. Some people scoffed at them — “Airmen who can’t fly?” they said, “They’re like penguins!”

Well, these airmen might not fly, but by jingo they could fight! 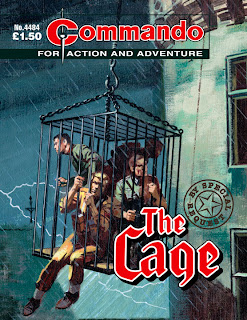 For over five hundred years the iron cage had hung there, swinging grimly outside the castle wall. No one knew how many wretches had suffered and died over the centuries, imprisoned by those stark, rusting bars. 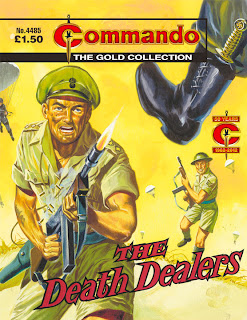 If you’ve already met…TOM, DICK and HARRY, you’ll know that when they’re around there’s plenty of action and trouble, plenty of grief — usually for Nazi Germany,
If you haven’t, the pleasure’s all yours.

But hang on to your hat, don’t relax your trigger finger for a second…for they’re a rough, tough trio. Fast-moving, hard-hitting, they give no quarter and expect none – one of the reasons Germans call them… 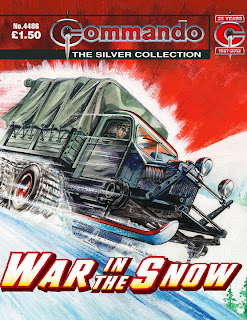 When a Wellington bomber with a very special cargo on board crashed in Norway, things were bad enough, but to make matters worse the Nazis had found out about it. So the race was on to reach the plane, with both the Germans and British speeding towards the crash site. On one side, a special snowmobile. On the other, a team of huskies!

• Commando Comics iPad App on iTunes
Posted by Jeremy Briggs at 7:00 am