In Review: Anthology One 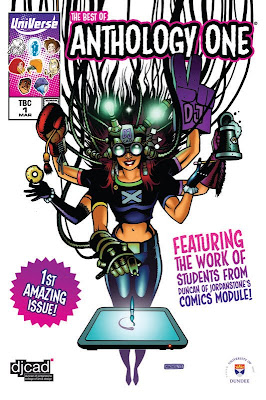 Anthology One is the first publication to come from the new UniVerse imprint set up as part of the various comics related courses run by the University of Dundee. Co-edited by Dr Chris Murray of the university's School of Humanities and Phillip Vaughan of the university's Duncan of Jordanstone College of Art and Design (DJCAD), it presents the work of the students of the 2011-2012 DJCAD Comics Art and Graphic Novels module as well as the winner and runners-up of the 2011 Tartan Bucket Prize that was run as part of last year's Dundee Comics Day.

A 72 page, US comic size book with an excellent cover by DJCAD graduate Colin MacNeil, Anthology One does exactly what is says on the tin and presents a series of short stories from each of the contributors: Nest by Stephanie Scott; Hubert and Remington by Charlie Parsons; Treasure Hunt by Rebecca Rolland; Mob Mentality by Calum Sutherland; Asylum by Louise Cadger; Code of Love by Samantha-Jo Ross; Subject Nine by Claire Roe; and finally Calvin The Dog by Jamie Buchanan.

The Tartan Bucket Prize section at the back features the winning strip, Belle's Magic Mobile by Stephen English, that was also published in The Beano, plus the four runners-up, The Ape Prentice by Stephen Baskerville, Holly Unlikely by Adam Smith, Elly's Evil Teddy by Jamie Huxtable and Jack The Robot by Paul Rainey. 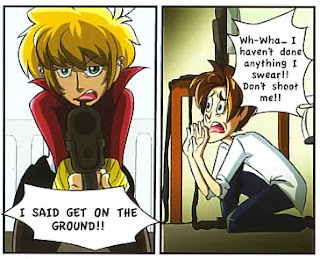 Any anthology title can be a hit or miss experience depending on the reader's interest but it has to be said that the standard achieved throughout the book by the DJCAD students is uniformly high. Their strips range from complete short stories to issue zero style intros to what could become a longer story and each strip also has a page or two of design sketches. Since I enjoy 'police procedural' TV series Samantha-Jo Ross' different take on the arrest of a suspect in Code of Love (left) is perhaps the highlight for me, helped by being complete in itself, but Stephanie Scott's moodily talky Nest and Jamie Buchanan's silently comedic Calvin the Dog, despite being worlds apart both story and art-wise, are also both interesting while Hubert and Remington by Charlie Parsons with its robot and human lead characters is perhaps the most 2000AD or Megazine-like strip in the collection. It would have been nice to read a paragraph or two by the creators explaining their work as part of their sketchbook pages but that is a minor gripe. 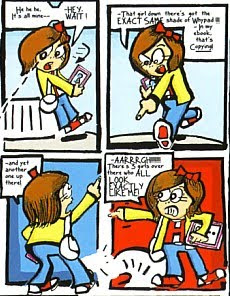 With the main section of the book being the DJCAD students producing artwork formatted for US size publication, the Tartan Bucket Prize pages formatted for DC Thomson's Beano and Dandy are a considerable change of pace. The introduction at the very beginning of the book by Chris Murray gives a little of the background to the competition but it would have been nice to read more details on the competition and its creators while a separate introduction to this section would have lessened the culture shock between the two different sections of the book. Of these stories Adam Smith's Holly Unlikely (right) is perhaps the most interesting with its girl character puzzled by being able to see herself in other panels on the same page, although it is also probably the least likely of the Tartan Bucket strips to work as a series.

Anthology One is an interesting snapshot of the comics work that has been gradually building up over the last five years or so at the University of Dundee and shows off a wide range of styles and genres. It will be interesting to see if Anthology Two, which is scheduled to contain work by the students of the MLitt in Comics Studies, can keep up the high standard of this first issue.

Anthology One will be formally launched and available to buy at the Hi-Ex Comics Convention in Inverness this weekend, Saturday 31 March and Sunday 1 April 2012. The cover price is £5.95.

Details of ordering Anthology One by post are available by e-mailing : universecomic@gmail.com

Anthology co-editors Dr Chris Murray and Phillip Vaughan are interviewed on downthetubes here and here.
Posted by Jeremy Briggs at 7:00 am