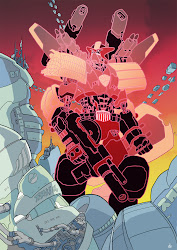 Currently drawing The Pirates of Pangaea and writing and drawing How To Make (Awesome) Comics for fantastic new weekly kids' comic The Phoenix! (www.thephoenixcomic.co.uk)

My strongest memory of my first prog is of John Hickleton's artwork on Nemesis The Warlock - utterly strange, vivid, sexy brutal and feeling very 'grown up'. It was a bit of a swerve from Whizzer and Chips, let me tell you.

I was lucky enough to fall in love with 2000AD during what must surely have been one of it's all-time hot streaks: you had 'The Dead Man', you had 'Slaine: The Horned God' kicking off, you had the never-read-anything-more-epic-before-or-since Phase 3 of Zenith. It was all rather extraordinary.

As to personal favourite strips: I've said it before and I'll say it again: Medivac 318 was the bomb.

I loved Zippy Couriers, too.

Back when I was a regular Squakk Dok Thargle (sic) one of the things I loved most about the comic was it's sheer variety; there was a great vibrant, chaotic feel to it, so you got things like Hewligan's Haircut and Time Flies slotting right in there alongside Dredd and the rest. And when it was on one of those great hot streaks, you had that variety of style and subject matter but the quality level stayed uniformly high. Of course, from time to time you'd get a run where the quality went a bit variable, too, but that seems to me an acceptable price to pay for a willingness to experiment.

I wouldn't presume to offer any advice, as whatever they're doing now it seems to be working, evidenced by the simple and extraordinarily wonderful fact that it still exists.

Although, that said: a Zippy Couriers revival would be pretty sweet.