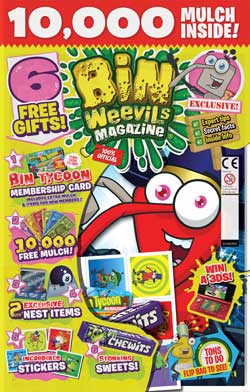 Egmont recently launched BinWeevils magazine, described by the publisher as the ultimate extension to the already successful online entertainment platform - and the second most visited website in the UK for children aged 7-13 and boasts a 91 per cent growth in users over the past 12 months.

The BinWeevils.com website was voted the website of the year at the children’s BAFTA’S last November, ahead of the Moshi Monsters and Club Penguin websites, with an average 105,000 visitors per day in December, according to Comscore. The brand is also set to further expand its physical profile with a range of toys and merchandising.

Egmont says Bin Weevils magazine will be “jam packed full” of exclusive content and secret hints that will enhance the online gaming experience and add a whole new level of interaction for fans. The magazine is also intended help experienced players and novices alike get more out of their virtual world.

The first issue launched on 15th February with six free gifts, and inPublishing reports the launch of the magazine has been backed with a substantial digital marketing campaign that will span the BinWeevils.com digital platform. The new title has also been promoted in other Egmont titles, including Go Girl and TOXIC, across miniclip.com and TV advertising on CITV and Nickelodeon channels.

“We are delighted to be adding Bin Weevils magazine to our market leading portfolio," commented Debbie Cook, Director of Magazines at Egmont UK.

"As well as sitting comfortably alongside other Egmont titles, Bin Weevils magazine is particularly exciting due to its hugely popular social gaming website (Binweevils.com) and the unique world that has been created by Bin Weevils Limited. We are proud that our magazine offers players an enhanced gaming experience and we see our magazine growing alongside the game.”

- Bin Weevils magazine is on sale now as a monthly title, priced at £2.99.

egmont dont make very good magazines, i hate them all because them all look like sick and soooo boring!!!
Club penguin is so much better because you get a free 7 day membership - which is awesome because you can buy clothes and everything!!! and bin weevils u just buy a hat.. wats fun about that?
Club penguin also gives you a free toy, has super fun games and if u send in ur igloo or penguin you can win 1000 coins for your penguin!!!
Egmont suck panini all the way :P