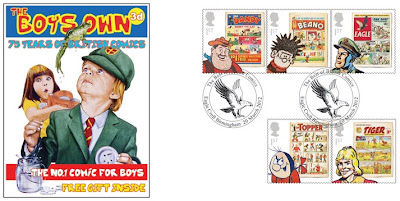 Britain's Post Office is celebrating what it's defined as "75 Years of British Comics" with a special issue of stamps featuring the covers of various much-loved comics, including 2000AD and The Beano.

Set to be released on 20th March 2012, the offer also includes two First Fay Covers featuring Boys Own and Girls Own - with a special 'Eagle' postmark.

The stanps serve to indicate not just comics still going strong but just how many are no longer around, but it's great to see the Post Office promoting our industry in this way, even if British comics have been published for much longer than 75 years.

This release follows on the heels of  commeorative issues such as one celebrating the work of author Roald Dahl on 10th January and Classic Locomotives on 8th February.

• The full Special Stamp Programme for 2012 is as follows: