In Review: Yakari and the Coyote 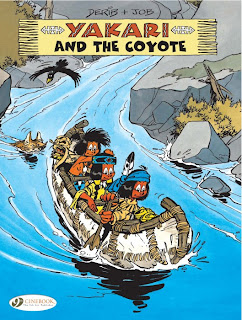 Yakari is probably the most junior of Cinebook's various series and features the adventures of a Red Indian boy who is able to talk to and understand animals in the time before the white men appeared on the plains. The series, which has reached its 36th book in France (as well as having two different animated TV series based on it), is written by Job (André Jobin) and illustrated by Derib (Claude de Ribaupierre) both of whom are Swiss. The ninth Yakari title to be translated into English and published by Cinebook is Yakari and the Coyote.

Friendly beavers bring Yakari a damaged canoe that they have found and, with the help of his friends Rainbow and Buffalo Seed, Yakari fixes it and the three children set off on an adventure down the river. There Buffalo Seed is cornered in a cave by a cougar and Yakari and Rainbow have no choice but to enlist a somewhat suspicious coyote family to help them rescue their friend. With Rainbow remaining with the coyote mother and her cubs for her own safety, Yakari makes use of the cunning of the father coyote to help him distract the cougar long enough to allow Buffalo Seed to escape to safety. 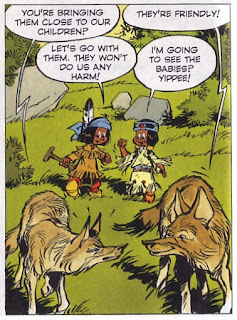 While Cinebook are very good about sending out review copies of much of their range, the Yakari titles are a series that were apparently sent to only a few reviewers due, I would presume, to their young nature. Yet having nabbed a copy of the previous title in the series, Yakari And The White Fleece, I was very taken with its friendly artwork and lettering plus its adventurous, albeit junior, storyline.

This Coyote book is no different with Derib's artwork in particular being a delight to look at while Job's plot of both Yakari and the coyote father outwitting the dangerous cougar is much tighter than the rather more languid quest plot of Yakari And The White Fleece. Perhaps the most amusing part of this story is the fact that Yakari is the only human character in the book who can understand the animals and has to act as an interpreter for his two friends as the animals try to tell them things.

While it will be a quick read for an adult this series is not aimed at them, so if you are looking for an easily read and child friendly graphic novel for the younger members of the family, be they boys or girls, then Yakari and the Coyote is well worth searching out.

* There are more details of the English language Yakari books at the Cinebook website.

* There are more details of the French language Yakari books at the official Yakari website (in French).
Posted by Jeremy Briggs at 7:00 am