In Review: Lucky Luke Vs The Pinkertons 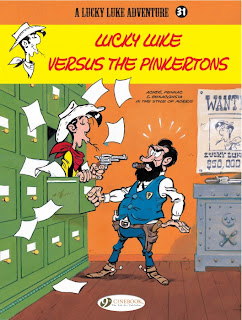 Cinebook have been selective in their choices of Lucky Luke albums to translate into English, jumping around in the original French order and with Lucky Luke Versus The Pinkertons they have come completely up to date with their first English Lucky Luke book that was not created by Morris.

It is 1861 and Lucky Luke returns from a manhunt in Mexico to discover that his position of good guy bounty hunter has been usurped in his absence by Allan Pinkerton and his fledgling detective agency. With Pinkerton cosying up to President Lincoln, the President himself tells Luke that after all Luke's good deeds it is time for him to retire and hand over to the more modern methods of the Pinkerton Agency. Despite feeling unwanted he obeys this Presidential decree and watches as law and order slowly becomes unstuck around him. With the Daltons once again out of jail and gunning for Pinkerton, Luke sees the need to come out of retirement and do things the old way. 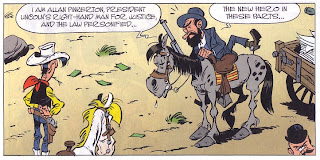 Lucky Luke was created by Morris (Maurice De Bevere) in 1946 for the Spirou comic magazine and he wrote and illustrated a total of nine albums by himself before Asterix's Rene Goscinny came on board as writer with his first story appearing in Spirou in 1955 . The pair produced 41 albums worth of Lucky Luke stories together. After Goscinny's death in 1977, Morris continued with a variety of different writers before he too passed away in 2001. Since then Achdé (Hervé Darmenton) has taken over the art chores and this is his fourth Adventures Of Lucky Luke book, as the non-Morris books are marketed, and the first with the writing team of Tonino Benacquista and Daniel Pennac in, as the book is at pains to point out, "the style of Morris."

Originally published in French in 2010 this was the first, and to date only, book by the new team so its theme of Luke's retirement before realising that he is still needed is somewhat appropriate. Indeed this concept of having Luke on the sidelines for a lot of the book means that it isn't so much Lucky Luke Vs The Pinkertons as 'The Daltons Versus The Pinkertons' and having Joe Dalton's fury, normally reserved for Luke, being aimed instead at Pinkerton is a neat twist on a recurrent panel that readers are used to seeing in the various Dalton books. This book, for a while at least, almost comes across as an alternative universe Lucky Luke story. 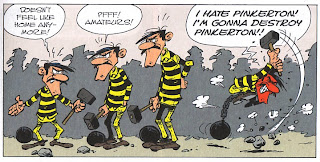 Achdé's art isn't quite as slick as readers would be used to with Morris' long run on the character yet it is closer to Morris' normal style than the earliest Lucky Luke albums that Morris produced which have a much more humorous and caricatured style. I wonder how many readers wouldn't really notice the difference between Morris himself and Achdé ghosting him?

It does feel somewhat like a passing of the baton story, and while it was actually the fourth non-Morris Lucky Luke published in French, it is the first to be published in English by Cinebook. Perhaps they are looking to see the reaction to a non-Goscinny book, although this does seem rather like diving in at the deep end rather than testing the water with one which at least has Morris on art duties.

Lucky Luke Versus The Pinkertons may not be a Morris book but it is still a fun story with humorous artwork and that, at the end of the day, is what we expect from a Lucky Luke book.

• There are more details of the English language Lucky Luke books on Cinebook's website.

• There are more details on the original French language Lucky Luke on the official Lucky Luke website (in French).
Posted by Jeremy Briggs at 7:00 am