In Review: Eagles Over The Western Front Volume 2 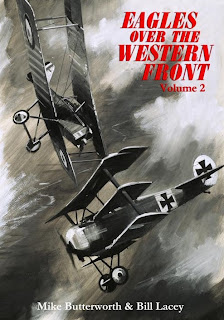 Bear Alley Books continue their Eagles Over The Western Front reprints from Look and Learn magazine with the second of three volumes that will combine into the entire run of the strip written by Trigan Empire's Mike Butterworth with black and white artwork by Bill Lacey and originally printed between 1971 to 1973. Set in France during the later years of World War I, the series relates the tales of Royal Flying Corps pilot Harry Hawkes as he fights the Germans in a series of improving biplane fighters.

As in the previous volume the stories range from short to long, tongue-in-cheek to deadly serious. The book begins in fun form with Harry travelling from France to London to be bequeathed a St Bernard in a relative's will, a dog which causes chaos at the airbase trying to get into the planes, and then is apparently killed by German shelling which means that Harry flies a bombing raid against the German gun emplacement only to find the dog safe and well on his return - a story that is all told in six pages. Perhaps the most interesting story of this volume is the rather longer tale of a famous music hall entertainer to signs up for the RFC and proves popular in the squadron due to his singing, however he is a considerably better singer than fighter pilot as is demonstrated when he enters the gun-sights of the feared Red Baron. 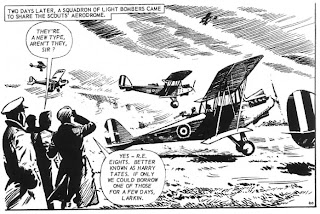 Whatever they are about, Butterworth's stories are fast paced and action packed and never repetitive as our hero's friends and colleagues come and go as he moves between squadrons and the series timeline progresses as he flies the newer and better planes that are being supplied to the RFC against differing German opposition. The story rarely feels confined by the original two pages per week publication rate from Look and Learn and Bill Lacey's artwork remains consistently good with a remarkable amount of detail in each panel. 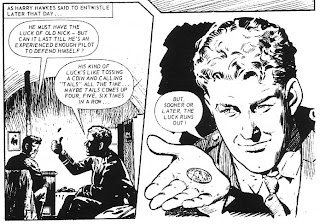 Unsurprisingly for a Steve Holland reprint book there is a feature at the beginning and after last volume's factual background to the war and the RFC, this volume's feature is rather more comics based with a article on writer Mike Butterworth. This takes the reader from Butterworth's abortive attempts to sell Avery scales through to his novel writing via the creation of various notable British comics characters such as Battler Britton and Jet-Ace Logan, his work as editor of comic titles as diverse as Playhour, Honey and Ranger, and of course his creation and long term writing of Look and Learn's best remembered and most loved strip, The Trigan Empire. The book also has a short feature on the original artwork that much of the pages are reproduced from and which, unusually, shows an alternate frame from one of the pages that artist Bill Lacey had to redraw prior to publication.

With a wraparound cover featuring World War One biplane combat by Wilf Hardy, Eagles Of The Western Front Volume 2 continues pilot Harry Hawkes' story and while, forty years on from its creation, its format and pacing are very different to modern comics, it shows just how good weekly British comic strips were be when a skilled writer was teamed with an enthusiastic artist.

• There are more details of the Eagles Over The Western Front books as well as ordering details on the Bear Alley Books blog.

• You can read early parts of Eagles Over The Western Front on the Bear Alley blog.
Posted by Jeremy Briggs at 7:00 am

I started buying this series for the Bill Lacey art, but I've been delightfully surprised by just how good the writing is.