In Review: Blake & Mortimer - The Sarcophagi Of The Sixth Continent Part 1 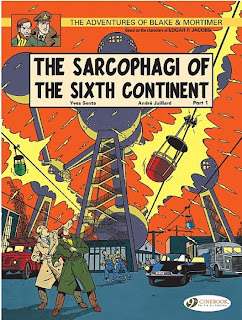 It is 1958 and Professor Mortimer is involved in the preparations for the British Pavilion at the Brussels World's Fair which will include real time scientific information being relayed direct from the British Antarctic Survey base at Halley Station on the coast of Antarctica. As well as providing the information for the World's Fair, the British base is helping the nearby new Indian base with power and supplies. However the Indian base is being used as a cover by the apparent reincarnation of the eternal Indian Emperor Ashoka, someone the young Philip Mortimer had come across many years before and who had vowed revenge on him as he blamed Mortimer for what had happened to his daughter. With the help of the Soviets, Ashoka plans to disrupt the World's Fair from his base in Antarctica, the sixth continent. 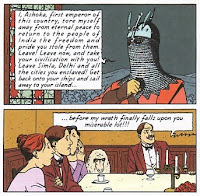 Blake and Mortimer books, especially the original ones created by Jacobs, can be very text and plot heavy and, especially with the deliberate translation into the rather formal 1950s style of English, they can often be heavy going especially when the characters decide to sit around and discuss just where the plot has got to. Yet this first part of The Sarcophagi Of The Sixth Continent doesn't seem to fall into that trap. Perhaps it is because there is so much going on with so many different characters or perhaps it is the fact that there are effectively two different but interconnected stories with the 'modern day' plot set in Brussels and the flashback in colonial India. With 'sarcophagi' in the title, the book gives the impression that the story will be somehow mixed up in archeology and yet the opposite is very much the case with the sarcophagi, when they appear, being much very much ultra-modern technology - for 1958 at least. 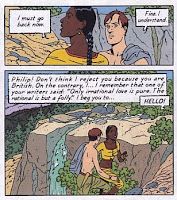 However the delight of this book isn't the main plot of the attack on the World's Fair but rather the long flashback to the doomed love affair between the young clean shaven Philip Mortimer and Princess Gita, Ashoka's daughter, and the revenge that her Indian nationalist father plans against both Mortimer and the colonial powers of the West. It helps to put a more human face on Mortimer as well give the book's main villain the strongest of motives.

If this "origin story" of Mortimer isn't enough, Sente adds a string of characters familiar from other Blake and Mortimer books from both Jacobs' original titles as well as the more modern books including, of course, the duo's seemingly perpetual nemesis Colonel Olrik. Since most are only used fleetingly, a good grounding in B&M continuity is not required but it is a nice touch for the fans of the series and logical to the plot that so many of the Professor's scientific acquaintances would be helping out at the many pavilions at the World's Fair. The rest of the book deals with the attack on the Fair and Blake and Mortimer's realisation that it is originating in Antarctica and that is where they must go to to deal with the threat, a journey that will take them into the second part of the story and the next book.

• There are more details of the English language Blake and Mortimer books on the Cinebook website.

• There are more details on the series in general on the official Blake and Mortimer website (in French).
Posted by Jeremy Briggs at 7:00 am

I think I might have to grab a copy.

Cheers for your review, Jeremy.