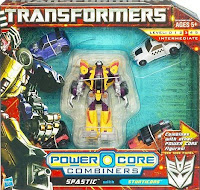 Hasbro, the toy company behind the hugely successful Transformers toy range (which has of course spawned both movies and comics) have had to scrap the UK launch of one of their latest characters due to a what can only be described as a case of cultural misunderstanding.

The character in question is called Spastic.

In the UK of course, spastic can be considered a hugely offensive word if used inappropriately.  However, spastic is widely used in the US to mean a clumsy or overexcited person. (Golfer Tiger Woods famously referred to himself as a 'spaz' a few years back and was forced to apologise following a negative British reaction).

The medical term "spastic" became used to describe cerebral palsy and has been defined as "Increased resistance to muscle stretching and loss of normal elasticity of leg and/or arm muscles resulting from CNS disease process. Often manifested by muscle stiffness, which can result in difficulty moving the arms and legs." British charity Scope, which aims to help disabled people achieve equality, particularly those with cerebral palsy, was founded as the Spastics Society in 1951.

In the UK, the word began to be used as an insult and became a term of abuse, used to imply stupidity or physical ineptness and the society changed its name to Scope in 1994.

In a company statement, Hasrob told Transformers fans they intended no offense by use of the name for one of its products "which has not and will not be available via traditional retail channels in Europe, including the UK.

"Thank you once again for notifying us about your concern," they told Transformers fan site Seibertron. "As a marketer of children's products, input from parents, families and fans regarding their experiences with our brands is extremely important to us.

"Our goal is to have all families who enjoy our brands feel good about their purchases and experiences."

"Hasbro aren’t usually ones to risk their reputation over something as trivial as the name of the toy, but it seems that this time they’ve certainly forgotten to scope the subject material at hand," notes Reputation Management in a blog post, a company which works to fight negative and incorrect content on the Internet."... [They] have said they were shocked by the level of outcry caused outside their own borders."

British and Americans do, of course, often use different words for common objects - "trousers" are "pants" in the US and a "lift" is an "elevator", for example. Normally it causes amusement. Just occasionally, it can result in genuine offence being taken.

A similar situation occurred with the UK release of the film The Last Airbender, with phrases such as "I could tell at once that you were a bender, and that you would realise your destiny" taking on a rather different meaning for British audiences.

The Transformers toy will continue to be called Spastic in America.