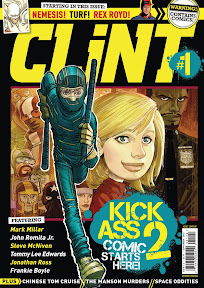 The first issue of Mark Millar's brand new comic anthology, CLiNT, has sold out - and will now have a second printing with a spanking comics-styled cover featuring Kick-Ass.

With its third issue now on sale in UK newsagents and comic shop, the 100-page monthly magazine published by Titan features brand new comics alongside news, features and interviews, with a mix of celebrity contributors and hot new talent.
CLiNT #1, which launched early September, boasts the first-look at Mark Millar and John Romita Jr.'s Kick-Ass 2, and Titan say it has flown off shelves. This first hit issue also included the start of Nemesis, by Millar and Steve McNiven, and sees two of the UK’s most outspoken TV personalities present their comic debuts.

Comics retailers will be able to order copies of the second printing of CLiNT #1 with its new Kick-Ass cover from this weeks Previews Plus and December’s Diamond PREVIEWS.  For more information visit www.previewsworld.com.

CLiNT issue 6, which includes the latest installment of Kick-Ass 2 is also listed in December’s Diamond Previews.

Good to see, but let's see what sales are like on issue 2, 3, and 4. I hope it survives, as we need more British publications out there on the newsstands, but after the shocking straw poll we held at BICS, I'm not so sure...

Any idea what that first print run would be John?

Titan tell me CLiNT 1 did well enough through Diamond to warrant the reprint variant cover.

Hah! That's a very non-comittal answer from Titan (but to be expected). I guess these figures will appear in the ABC magazines listings anyway. I saw Rich J was looking for information from those, so maybe he's doing a little digging.

Of course, that straw poll was of dedicated comic fans who'll have bought the comics already. If Clint is to be a success it'll have to reach out to that wider audience. If it succeeds in THAT, then maybe we'll start to see strips appearing in Nuts and Zoo (joy). Of course, Loaded had its own comic series running off and on for a while, so that'd be nothing new.

Let's just hope the low-brow readers of Clint will eventually be turned onto something sequential that has a little more merit (highly unlikely of course). I guess Mark's been pushing the concept of the "Lad's Comic" since the days of Big Dave in 2000 AD.

The fact that they're doing this comic-oriented reprint points to it doing very well in comic shops - a reprint of this kind is something of a rarity. My info is that the sales are pretty good overall, and certainly better than many other comics titles.