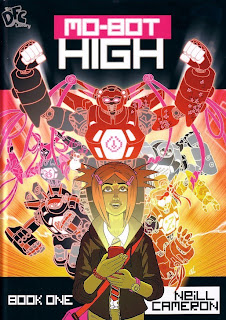 Collected from the pages of the weekly DFC comic, Mo-Bot High is Neill Cameron's take on secondary school girls, their mobile phones and giant battle robots, all collected together into one multi-coloured hardback by the DFC Library.

Asha has moved to from London to Middleford with her father and on her first day at Midford High School as she walks into the playground, even before she has spoken to anyone, her mobile phone is downloading an app that she has not requested. Discovering that everyone is behind the bike sheds watching two giant robots battle it out as if it was an everyday event, she quickly learns that the DMC app gives her phone the ability to create a Digital Mobile Combat-Suit that she can control. Picked on by the school bullies, Asha has to quickly learn the controls of her Mo-Bot to both defend herself and to fit in with the rest of the school girls. While the teachers and parents seem oblivious to the robot battles in the school, one cleaning lady seems to be taking rather a lot of interest in the new student and her newly learned abilities.

This is very much a girls school story for the 21st century with the girls not just running the battles, whether for strength or speed, but also customising their Mo-Bots like accessories - flower patterns are an option. Yet there is no 'jolly hockey sticks' about it despite one Mo-Bot, amusingly, using a hockey stick as a weapon. Boys are around but they are sidelined in the story by the simple expediency of them preferring to use their Mo-Bots to play football. The teachers are blissfully unaware of the battles going on in the school as they are kept at arms length either by the girls hiding the Mo-Bots from them or by the sinister cleaning lady and her dinner lady associates misdirecting them. Since the DMC app does not work outside of the school grounds there isn't a problem with parents discovering them and, apparently, any battles go on out of public view. 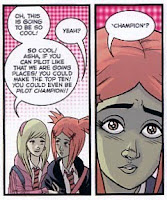 Story-wise Mo-Bot High comes across as The Matrix as done by The Sarah Jane Adventures team with the visuals being a mix of Transformers and Tron. With the real world represented in traditional comic line art, the impressive Mo-Bots and their dynamic battles are all CGI style graphics, motion lines and bright colours - even the book's end papers are in a dazzling dayglo pink. Yet despite the apparent incongruities, Neill Cameron is able to get it to all hang together with the sinister cleaning lady always watching the children adding an air of menace in the early part of the story and her importance being revealed towards the end. Indeed the story works very well as a book and does not have the obvious weekly segments that some of the other DFC Library titles display.

Mo-Bot High is a colourful action adventure for girls with enough of an interesting back story and intriguing ending to leave me hoping for a second book.


• There are more details of Mo-Bot High including sample pages at the DFC Library website.

• There are more details about Digital Mobile Combat-Suits at Neill Cameron's Mo-Bot website and more about him on his blog.
Posted by Jeremy Briggs at 7:00 am