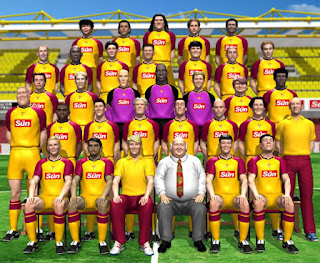 Football comic Striker is to have its entire 25-year archive made available to read free on its official website, striker3d.com.

The library has been launched with the release of the first seven stories from 1985 to 1987 and new episodes will be added every day.

Striker appeared daily in The Sun until September, 2009 and then featured for nine months as a weekly page in lads magazine Nuts.

“I want to concentrate on new writing projects." says Creator Pete Nash, "but this is a great way of keeping Striker alive for years to come.

“With the exception of the first three years of strips which were printed in a 1990 book, the stories have never been republished following their appearances in The Sun.

“Many of Striker’s fans have never seen these early stories and the ones who have will be able to enjoy a daily trip down Memory Lane.

“My old employers at News International are putting their content behind a paywall but if I did that with Striker it would end up being pirated and there would be a smaller readership.

“Making it available free is an experiment but if enough people read the archives then a profit can be made from advertising.”

The striker3d.com website is being developed, hosted and funded by Isle of Man-based business solutions company Intelligence Ltd.

Steve Woodford, the company’s Chief Executive, said: “I had never read Striker before but I was coming across so many people saying how much they missed it after it ended in The Sun that I decided to check it out.

“The episodes can be funny or dramatic but always compelling. It seemed to me that having a quarter of a century of stories like these that are popular with both young and old readers alike was an opportunity not be missed.”

•  View the Striker archive at: striker3d.com
Posted by John Freeman at 12:56 pm

Late to the party aren't you? Those archives launched months ago! Old news.

Hi James - we reported on the archive going online some time back, but Pete Nash got in touch with us this week to say it was going to be free. Originally he was considering a subscription-only format but is now going with a free-with-advertising model. Sorry we didn't make that clear.