In Review: Iznogoud And The Magic Carpet 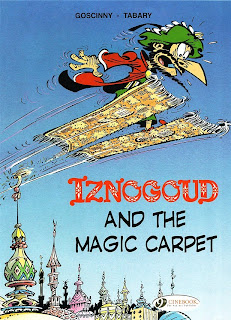 "I want to be Caliph instead of the Caliph!"

Baghdad's grand Vizier Iznogoud is an arrogant, conniving man with ideas above his station and that station is as number two to the placid and rather dim Caliph Haroun Al Plassid. Fortunately for everyone concerned the Caliph is oblivious to Iznogoud's, and his ineffectual manservant Wa'at Alahf's, attempts to dethrone him.

The humorous attempts of Iznogoud to become Caliph were written by Asterix author Rene Goscinny and illustrated by artist Jean Tabary beginning in Record magazine in 1962 before moving into Pilote in 1968. Jean Tabary continued the series after Goscinny's death and to date there have been 28 albums published and it has been made into a cartoon series and even a live action film.

Iznogoud And The Magic Carpet was originally published in French in 1973 as Le Tapis Magique and has been translated into English before appearing in the UK in 1980 published by Egmont/Methuen and again in the short lived Iznogoud Monthly in 1996. Unlike his Asterix books which were one story per book, Goscinny wrote the Iznogoud books as multiple short stories so as well as The Magic Carpet this book also includes Incognito, The Tiger Hunt and The Box Of Souvenirs. 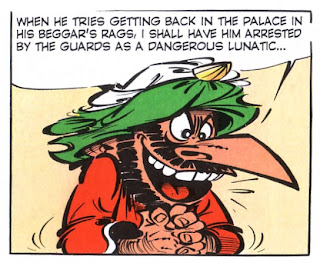 In The Magic Carpet Iznogoud attempts to give the Caliph a magic carpet which will transport its rider to China and not bring him back again. In Incognito Iznogoud persuades the Caliph to dress as a beggar and go out into the city to hear what his subjects really think of him while, at the same time, ordering the palace guards to imprison any beggars that appear at the palace gates. The Tiger Hunt has Iznogoud persuading the Caliph that he needs a tiger skin rug and that the best way to get one is to attempt to hunt a tiger himself. In The Box Of Souvenirs a Japanese tourist arrives at the palace with a camera that reduces objects and people to mere photographs. 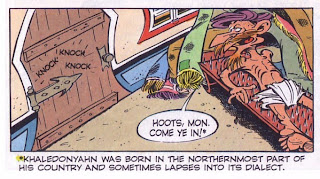 The basic premise of each story is the same, to eliminate the Caliph so that Iznogoud can take his place, and so the concept has the potential to get old very quickly. However Goscinny's writing is of a good enough standard that the reader's interest is retained often by using the national stereotypes that are also common in the Asterix books. Here we have Japanese tourists with cameras and the haggling of middle eastern market traders taken to extremes. For the British reader the story of the magic carpets may be the most interesting with the Scottish(!) magic carpet seller named Khaledonyahn. Tabary's artwork is much looser than Uderzo's is on the Asterix books but works for the stories of the manic Iznogoud and his depictions of life in the streets of Baghdad are particularly detailed.


Iznogoud And The Magic Carpet hits the mark well with its dastardly plots, witty puns and often manic artwork.

There are more details of the current British Iznogoud books on the Cinebook website.

There are more details of the French Iznogoud books at the Tabary Editions website (in French).

There are more details of Iznogoud around the world at the Iznogoud World website.
Posted by Jeremy Briggs at 7:00 am