Dublin City Con downsizes, but back in style in 2011 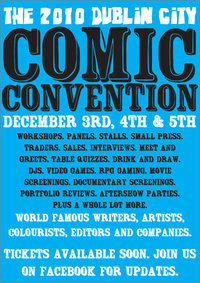 The organisers of the popular Dublin City Comic Con have announced the event is to "downsize" for 2010, with a smaller festival replacing the planned larger event which has been hit by venue problems.

However, the organisers say they'll be back with the main event in March 2011.

"We've had a hiccup in the ever wandering story of the DCCC," the organisers have announced on the event's facebook page. "We had a venue booked for a few months and all was sailing straight when we found out that the venue has been sold. That left us in a bad position to find a new venue in time: we thought we did but then all went wrong in a hundred different ways."

As a result of these logistic problems, Dublin City Comic Con will not be happening in its traditional form this year. "The plan is to move the entire event to March in 2011," say the organisers.

"What we are going to do is run a small festival on December 3rd and 4th in Dublin. This was the plan for next year anyway. We were to start doing two events per year - a traditional convention and a small social comic festival.

"We will have two or three comic pros over [in December], a small comics market, signings and some workshops, over two different pubs and bars per night."

This is the second convention popular with British fans to be hit by problems in recent months. The organisers of Hi-Ex recently announced their planned 2011 convention in Inverness would not take place at all, to the dismay of regular attendees.
• Entry to the DCCC 2010 Mini-Festival will l be €8Euro per night from 6.00pm till pub closing. Venues to be announced - see the convention's facebook page for the latest news or go to www.dublincitycomiccon.com (as of 21st October the DCCC web site was not online)
Posted by John Freeman at 5:05 pm