Never In The Field Of Human Conflict...

The 15th of September is Battle Of Britain Day commemorating the victory of the Royal Air Force seventy years ago in defending the United Kingdom from the up to then undefeated forces of Nazi Germany. Yet things could easily have been very different... 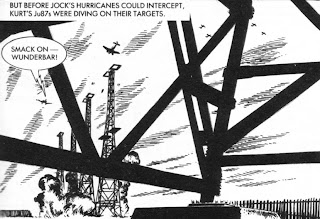 It is Britain, late autumn, 1940: it started with Ju87 Stuka dive bombers felling the towers of the Chain Home radar stations.

Without adequate radar coverage, Fighter Command did not have prior warning of the waves of Luftwaffe bombers that pounded the RAF's fighter bases. With their southern airfields destroyed, what was left of the RAF did not have the range to attack the Nazi invasion barges as they crossed the Channel. With our remaining fighters operating from any northern airstrip they can find, spares and replacement aircraft are non-existent and what little defence the RAF can still muster is fading fast.

As it sailed south from Scapa Flow to stem the flow of German equipment crossing the Channel, and with the RAF unable to provide adequate fighter air cover, the Royal Navy's Home Fleet was ambushed in the North Sea by an overwhelming force of torpedo bombers, dive bombers and U-boats operating out of occupied Norwegian and Danish bases. With the Pacific fleet too far away, the Royal Navy's Mediterranean Fleet immediately set sail for home waters but by the time they reach us the only major anchorages likely to be still available to them could be the Clyde in western Scotland and Belfast Lough in Northern Ireland. With the Province's minimal air defences there will probably be little left for them to do there but to gather as many transport ships as possible to evacuate those who want to leave to the Dominions. With the fall of Britain, the neutral Irish Free State will have little choice but to capitulate to German demands.

In Scotland the east coast mainline railway has been thrown into chaos after Luftwaffe bombers successfully downed the spans of the Forth Rail Bridge trapping warships and oil tankers up river.

In England, the Wehrmacht's Blitzkrieg has breached all the southern English Stop Lines and reached Northampton.

With their Whitehall war rooms destroyed, Churchill and what is left of the war cabinet are in the Paddock bunker in North London.

The King and Queen are on a Royal Air Force flying boat bound for Nova Scotia.

London is surrounded. Millions are trapped in the ruins and in the occupied south of England, Nazi forces are beginning to round up citizens based on a list published in the Sonderfahndungsliste G.B. 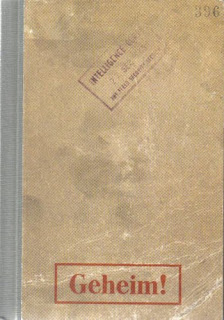 Fortunately most of that never happened but one part, the Sonderfahndungsliste G.B., is real. It translates literally as the Special Search List for Great Britain but today it is better known simply as The Black Book. It is the list of Britains that the Germans intended to round up once they had control of the country. It does not list what would happen to them but it does list who they were to be handed over to - organisations that included the Geheim Staadts Polizei, better known as the Gestapo. While this book includes the obvious politicians and trade unionists, it also lists other public figures who had spoken out against the Nazi cause including writers, performers and journalists. Based on what happened in other occupied countries, it is unlikely that many would ever have been seen alive again.

It is not really surprising that the Gestapo would want to take control of the British newspapers and, since they worked for a large newspaper organisation, it has frequently been written that DC Thomson staff were included on the list, specifically the editors of the Beano and Dandy as well as Thomson's top humour artist, Dudley D Watkins. You can read the truth behind this in Were The Wartime Beano And Dandy Editors On A Nazi Death List? over on Bear Alley.

Of course the invasion never happened. The Chain Home stations survived and the Luftwaffe stopped bombing the RAF airfields and shifted their emphasis to the cities. It was enough of a breathing space for the RAF to regroup and go on to win the Battle Of Britain. While it didn't seem like it at the time as British cities and their occupants endured the Blitz, it was a turning point in the war. Without that victory the world today would be a very different place but, being a British comics blog, we can speculate what might have been in the comics of a Nazi occupied Britain.

With their editors gone and publication ceased, the Beano and Dandy would not be the best known comics in the country today. They would have become mere footnotes in history along with other short run 1930s titles like Magic and Skipper, forgotten by all but the most ardent comics fans. 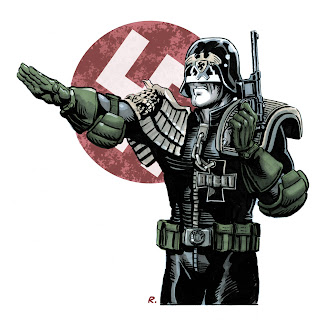 In 2000AD, Kommandant Dredd of the Berliner Mega-Stadt would fight the Apocalypse War against the evil forces of West Meg One, while Reichsmarshal Torquemada would command the all conquering forces of the thousand year Reich as they take their rightful place in the Universe by sweeping aside all lesser life forms.

With no Dudley Watkins drawing his two greatest creations in the Sunday Post newspaper, The Brawns and Oor Villi could have turned out rather differently. Grandpaw Brawn would reminisce on the glorious day that German troops held their victory parade down the main street of Auchenshuggle while Daphne would be jealous of younger sister Maggie's SS boyfriend. Meanwhile Villi would try not to get in trouble with the local Polizsten while searching for English fifth columnists.

In Warlord, "Swastika Fritz" Fredriksohn would have been the only German to fight with the Japanese forces as they launched their amphibious invasion of the Hawaiian Islands, while Abwehr agent Reichsherr Peter Flint would wage a secret war against the insidious activities of Canadian, Australian and American spies. 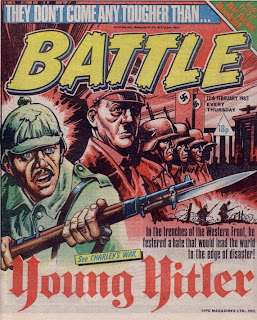 In Battle, on the Eastern Front the English traitor Johnny Redburn would watch the gradual destruction of the Soviet Falcon Squadron as he lead them to their deaths against the might of the glorious Luftwaffe, while the less gung-ho and much more thoughtful Young Hitler tells the story of the Fuhrer's time in the trenches of France and the incompetence of the Imperial German generals as they sacrificed their men against the hail of bullets from the American machine guns.

Of course after seven decades as citizens of the Reich it is highly unlikely that we would have been reading any of them in English.

• The Royal Air Force Benevolent Fund is the RAF's leading welfare charity, providing financial, practical and emotional support to serving and former members of the RAF - regardless of rank - as well as their partners and dependents. Their website is here.

(With thanks to Graeme Neil Reid for the illustration of Kommandant Dredd)
Posted by Jeremy Briggs at 7:00 am