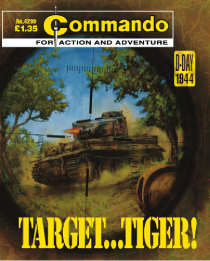 The latest issues of DC Thomoson's Commando, on sale now, features another cover from Janek Matysiak using his new direct-to-screen way of working. (You can see the first he did in this way here). The releases also feature the work of Ferg Handley, Macabich and

D-Day, Normandy, June 1944 — and tank commander Joe Gibson is raring to go. Then a Tiger destroys his Cromwell killing his crewmates. He blames himself for their deaths.
Joe soon returns to duty but soon in an inferior, in his mind, M4 Sherman. To his new crew it looks like Joe has lost his nerve.
Was that the truth? Even Joe is beginning to wonder — especially when he has a Tiger in his sights…

They were simply supposed to showcase some new nine-pounder field pieces. But in 1861, Austrian artillery Lieutenant Stefan Kircher and his battalion of gunners found themselves caught in the thick of the American Civil War. And fighting on the side of the Confederate South against the Union.
Stefan didn’t like it. And worse, some the Confederates weren’t keen on the Austrians’ involvement either...

They couldn’t know then that the day of victory would come in May, 1945, but they did know that only the lucky ones would survive the war. Brothers Rory and Hamish McLean, fighter pilots, would push their luck to the limit... and beyond!

This is Part five of Commando's seven-part series celebrating the end of the war in Europe in 1945. This time an air story with illustrations by two experts in the field.

VE Day, May, 1945. For Wehrmacht Major Franz Thomas, a day that hadn’t come soon enough to save many lives... and he was sure it was his fault!

Part six of the seven-part VE-Day series. The story is seen from the point of view of a German — something Commando has done many times over the years.