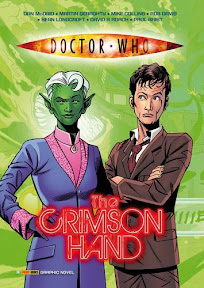 Speculation is rife on the future of Panini's Doctor Who comics collections today, after news broke that the planned release of The Crimson Hand - featuring Tenth Doctor David Tennant's last comics adventures - had been cancelled.

Sheffield based store Galaxy 4 was among the first retailers to break news to customers that the collection had been postponed due to "contractual difficulties", prompting fans to wonder if the entire series - including an expected collection of Seventh Doctor stories - had also been cancelled.

Some even speculated that comic strip was being dropped entirely from Doctor Who Magazine.

Doctor Who Magazine editor Tom Spilsbury has told fans he is unable to comment at this time on the fate of the range, but he did tell downthetubes the difficulties for this collection "shouldn’t affect us carrying on the regular strip in DWM".

Comic strip has long been a staple of Doctor Who with the BBC featuring new stories in Doctor Who Adventures - a title which has seen declining sales in recent months, detailed in recent ABC audited sales figures and on the BBC web site - and Doctor Who Magazine. IDW publishes Doctor Who strip in the US that is widely available in the UK through what is known as "grey" importing, and online piracy.

The Crimson Hand is planned as the third and final volume of comic strips collecting the Tenth Doctor's complete adventures as seen in the pages of Doctor Who Magazine, as the Time Lord joins forces with Ms Majenta Pryce and embarks on his most remarkable series of journeys yet.

Let's hope the delay is just a temporary set back, as the collection features some of the best ever Doctor Who stories in recent years.

Commenting on Doctor Who Adventures, Jaynie Bye, joint MD of BBC Children's Magazines and publisher of Match of the Day acknowledged the now weekly title's sales during the last sixth months of 2009 - the latest audit period - were down year on year, but said this was "as anticipated", noting it was still performing well given the absence of the show from the schedules for most of this period.

"We are confident that circulation will increase with the return of the Doctor to our screens in 2010," she stated.
Posted by John Freeman at 1:15 pm

Email ThisBlogThis!Share to TwitterShare to FacebookShare to Pinterest
Labels: Doctor Who, Doctor Who Adventures, Galaxy 4