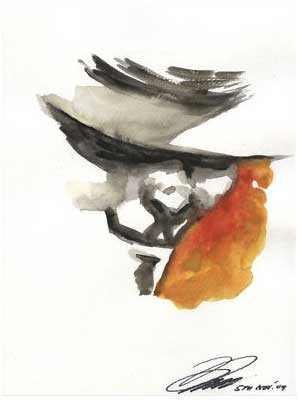 A second batch of David Lloyd V For Vendetta illustrations are now on eBay in support of the Cartoon Classroom project, which aims to serve libraries, schools, colleges and museums by directing them to creators who teach in these specialised areas via workshops and talks and to direct those who wish to find training in these areas for the wildest range of educational opportunities that can be found for them on a local and national basis.

As we previously reported, artist David Lloyd originally put four V For Vendetta illustrations that he did at the opening night of the Comica Festival at the Institute of Contemporary Arts in London on Guy Fawkes night, 5th November 2009, onto eBay. These sold for over £400 in total.

The four new illustrations can be seen here on eBay and the auctions are due to finish just before midnight on the evening of Sunday 13 December.
Posted by John Freeman at 11:49 am

this is a great review for v for vendetta!