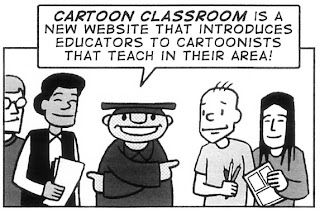 Cartoon Classroom is a free resource website set up by David Lloyd, Steve Marchant and Paul Gravett which aims to centralise all the information available on the study of cartooning and sequential art in the UK and the Republic Of Ireland.

As we've previously reported, it aims to serve libraries, schools, colleges and museums by directing them to creators who teach in these specialised areas via workshops and talks and to direct those who wish to find training in these areas for the wildest range of educational opportunities that can be found for them on a local and national basis. 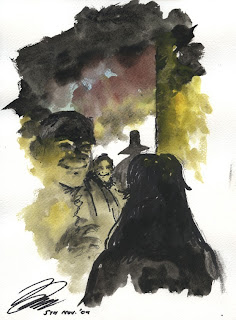 Now, to help raise funds for the site, artist David Lloyd has put four V For Vendetta illustrations that he did at the opening night of the Comica Festival at the Institute of Contemporary Arts in London on Guy Fawkes night, 5th November 2009, onto eBay. The auctions for the four illustrations end after 11pm GMT on Sunday 29 November 2009.

Of Cartoon Classroom, Lloyd says, "the general public can often flounder trying to find what they need in this area of the arts. As I suffered from this lack of specialised knowledge in my tortured past, I wanted to lend my support to helping fix this situation for others."

• Details of the four sketches can be found on eBay.

• More details about Cartoon Classroom can be found on its website.
Posted by Jeremy Briggs at 7:07 am