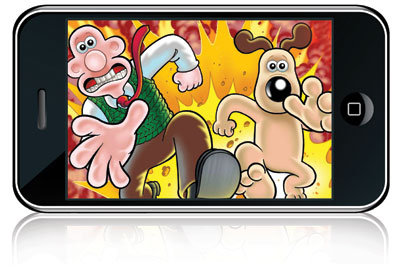 Launched as the animated pair celebrate their 20th Anniversary, each comic is a complete Wallace & Gromit adventure and is packed with bonus features on the inveterate inventor and his faithful canine companion - and one of them is free-to-view.

“It’s really exciting to see Wallace and Gromit at the forefront of such a cracking new technology," commented Wallace & Gromit Digital Comic editor Ned Hartley, "although I secretly suspect that Wallace would be more comfortable with the type of apple that comes with cheese.”

• For more general information visit: http://titanpublishing.com/iphone/ and to keep up to date on new W&G phone releases visit this Facebook fan page

When strange shapes and flashing lights are seen in the night sky, there are only two paranormal investigators that can solve the problem. Sadly they aren’t available, so Wallace and Gromit might as well have a crack at it. After all, what could possibly go wrong?


Where does he get those wonderful toys? Ever wondered where Wallace gets the parts for his eccentric, wonderful (and occasionally useful) inventions? Find out here!


Wallace and Gromit take time out to visit Wallace’s biggest fan in Japan, Hiro Worship. It turns out all is not well in the land of the rising sun, and it’s not long until Gromit has to deal with some monster problems!

Nothing gets Wallace as worked up as the disbanding of the local brass band, despite the fact that they aren’t very good, no-one wants to see them and they don’t really want to play anyway. This calls for... an invention!
Posted by John Freeman at 10:59 am