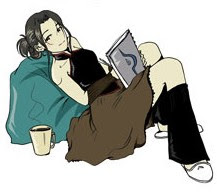 British artist, writer and general ambassador for all things Manga, Emma Vieceli, has added a webcomic to her website.

Dragon Heir was the first comic series that she worked on providing the story and art with Andrew Ruddick providing the script. The 32 page B&W fantasy comic has reached issue 9 with the first three print issues now sold out. The first six original issues have been collected into a 168 page graphic novel which is available direct from Sweatdrop Studios. 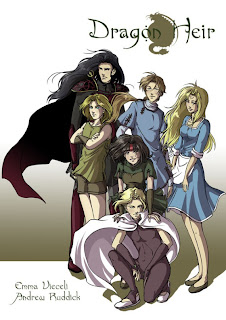 In the story of Dragon Heir, Protus sets out on a journey to find the other three Dargon Heirs and take them to the location chosen for Spiratu's Ritual of Transcendence. This act will leave the four young men free of the dangerous dragon spirits they have harboured since they were born; free to begin their mortal lives with Spiratu's blessing.
"However", says Emma on her site, "the original pages had begun to show their age. I am currently working to smarten up and rework the first 5 issues to bring some cohesion to the series." She goes on to say, "The story that was told in the first five issues of the comic is being redrawn and in some places entirely rewritten, so even the Dragon Heir veterans amongst you should find interest here."
These reworked pages are now becoming available on her website with new ones being put on at a rate of five pages per week. In addition Emma will be providing a blog post for each new batch to allow readers to leave their comments on the Reborn version of her tale.
Dragon Heir: Reborn webcomic begins on Emma's website.
Original Dragon Heir comics and the graphic novel are available from the Sweatdrop Studios webshop.
Emma Vieceli will be appearing in the Comic Village at the MCM Expo next weekend, 25 and 26 October, in the Excel Centre in London and at the Thought Bubble comics convention at Saviles Hall, Leeds, on 21 November 2009.
Posted by Jeremy Briggs at 10:16 am