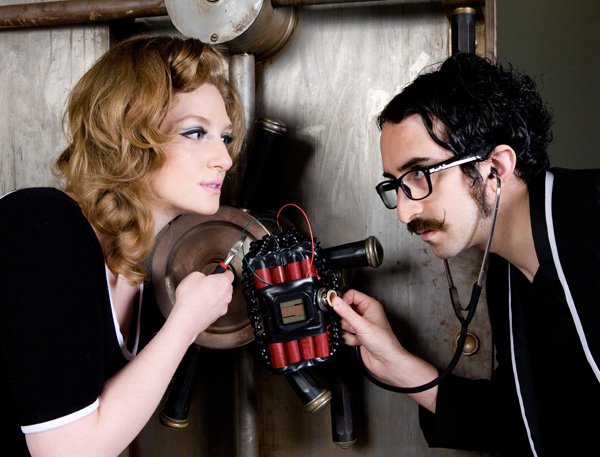 Fans of The Prisoner reading this blog might want to check out the various web sites of US band Do Not Forsake Me Oh My Darling, which has a new music project in the works inspired by the show aptly suited a group whose very name is inspired by a The Prisoner episode.

The band plan to record 17 songs all inspired by the episodes of the series: three are available for download here, and they sound good to me!

"Our set-up is kind of unusual," says drummer and vocalist Sophia Cacciola, formerly with the band Blitzkriegbliss. Together with bassist Michael Epstein (current frontman of The Motion Sick) "We are a duo - I sing and play drums, and and the bass player plays through both a guitar-rig and a bass-rig."

Sophia and Michael met in early 2001 while working different aspects of intelligence for the same US government agency. Both had been fascinated all of their lives with spies and had sought out spy-related careers after childhood obsessions with TV shows like The Prisoner, The Avengers, Danger Man (known in the US as Secret Agent) and Mission: Impossible. They each found, however, that real-life intelligence work was not as glamorous as they had hoped. Epstein was better at mathematics than gymnastics, so he was put to work in a secret computer laboratory. As an expert in cryptography, he spent his spy years working to identify and decipher transmissions hidden in digital images.

Cacciola, on the other hand, is still not allowed to disclose the specifics of her five years of government work, but she will admit that she never had to shoot anyone. In fact, she never carried a gun at all.

Both of the band members have since retired from the intelligence business. Although neither has ever cartwheeled between lasers to avoid alarm systems, transported microfilm, or even directly encountered enemy agents, the pair has crafted a series of songs drawn from a blurry mixture of real-life experience and Hollywood depictions of espionage.

They have also drawn on the minimalist approaches of classic spy television, known for its plodding cerebral traversals, rather than modern explosion-heavy fare to create the sonic landscapes for their stories, with a music style that echoes the sound of proto-punk/new wave/no wave bands and dark songwriters like Joy Division, Einsturzende Neubauten, The Velvet Underground, Sonic Youth, Nick Cave and the Bad Seeds and even Leonard Cohen.

Email ThisBlogThis!Share to TwitterShare to FacebookShare to Pinterest
Labels: Music, The Prisoner