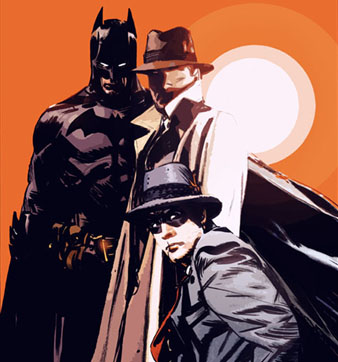 In a podcast for top cult news site Geek Syndciate, the often controversial DJ and major celebrity comic fan Jonathan Ross (who has also even appeared in a few, such as The Beano!) has revealed the upcoming four issue mini series he's written with Tommy Lee Edwards is be titled Turf and could be a period gangster comic with supernatural themes.

The US publisher is yet to be announced.

Ross says Tommy Lee Edwards, who he was introduced to by Mark Millar, whose art credits include Batman, Doctor Who, James Bond, Star Wars and more (check out his official web site for more superb portfolio work like the piece above), is currently working on a film project but will start on Turf in about a month.

Bleeding Cool reports that in earlier tweeting commentary, Ross stated that he was finishing the script for issue two and that it wasn’t a superhero comic but was set in the past and featured 1920s vampires, describing it as as "an intelligent popcorn movie. Lots of action, lots of setting, lots of cool ideas, but with an emotional heart to it."

Ross was also asked about how he got into comics in the podcast: he mentions the free mask in Captain Britain given away with Captain Britain Weekly #1 in the 1970s, running his own comic shop in London's Soho with Paul Gambacinni and how they lost thousands of pounds a week, why he is unable to attend comic conventions as much as he would like, and about the adaptation of Mark Millar's Kick Ass that Jonathan's wife, Jane, is working on as well his view on comic to film adaptations.

• Check out the podcast here on Geek Syndicate
Posted by John Freeman at 8:33 am