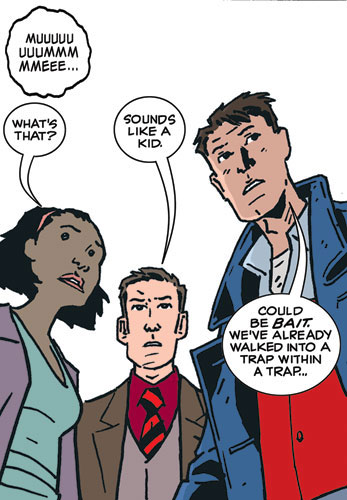 The latest Torchwood magazine, on sale tomorrow in the UK, features the final part of award-winning British comic book creator Nick Abadzis's story for the title.

Abadzis, creator of the acclaimed graphic novel Laika and a contributor to The Times and Guardian’s comic sections, writes part three of Broken for the hit BBC show's official tie-in publication. In the story, the team are trapped in a mysterious hotel – Gwen Cooper is plagued by the ghosts of Torchwood past, while Captain Jack and Ianto must face Bilis Manger.

Acclaimed artist Paul Grist, creator of Jack Staff and Kane and a regular contributor to the Torchwood title, provides the art.

Abadzis joins a long list of stellar talent to have contributed to the Torchwood comic, including Tommy Lee Edwards, Simon Furman, Ian Edginton, D'Israeli and, recently, Carole and John Barrowman.

• Torchwood Magazine Issue #17 is on sale in the UK and Ireland tomorrow, 20th August and in the US on 15th September.
Posted by John Freeman at 11:21 am