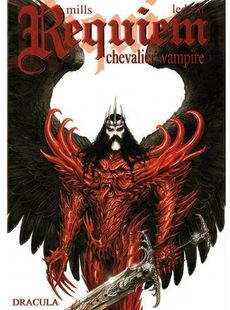 Top British comic writer Pat Mills will be signing copies of the English language release of the first volume of his Requiem Chevalier Vampire series at Forbidden Planet London next month.

One of the founding fathers of 2000AD and a legendary name in British comics, Pat Mills has created some of the best-known and longest running characters for the magazine, including Slaìne, ABC Warriors and Nemesis The Warlock. His other work also includes writing and developing Judge Dredd and writing the classic World War One war comic strip, Charley’s War, for Battle.

Created to break into the French comics market, Requiem Chevalier Vampire, which is being published by Panini in the UK, collecting material first published in English in Heavy Metal magazine, is characterised by extreme violence and by each issue being more daring and darker than the one before. Several scenes of violent sex fuse with wonderfully dark humour and cynicism; it’s a story of hell and resurrection that contains no concept of justice. Inspired by Mills’ own fascination with reincarnation, Requiem Vampire Knight is a violent, fantastic tale of drugs and reversed reality – and of a search for a lost love.