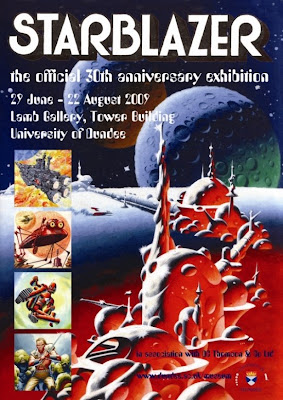 Opened as part of the Dundee Literary Festival Comics Day on Sunday 28 June 2009, Dundee University's Lamb Gallery is currently displaying a selection of artwork from DC Thomson's Starblazer digest in an exhibition curated by Matthew Jarron. Starblazer was published twice a month from April 1979 to January 1991, running for 281 issues, and this exhibition celebrates the 30th anniversary of the title's launch. 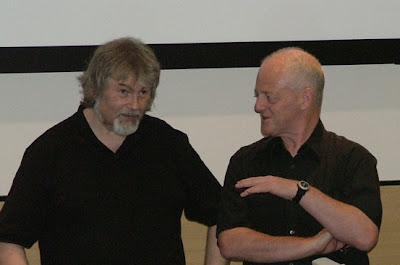 Starblazer was the brain child of editor Jack Smith and was run by him and deputy editor Bill McLoughlin before Smith retired and the title was passed over to editor Bill Graham's control. The two eras of the title can be seen in the preponderance of space opera stories during Jack Smith's time and the preponderance of fantasy stories during Bill Graham's. However Bill McLoughlin (shown above with bearded artist Keith Robson) was the mainstay of the title through both editors and it was he who performed the gallery tour during the opening, telling the attentive audience the background to the title as well as offering a few amusing stories along the way. There are more details of the background to Starblazer in the downthetubes interviews with both Bill Graham and Bill McLoughlin. 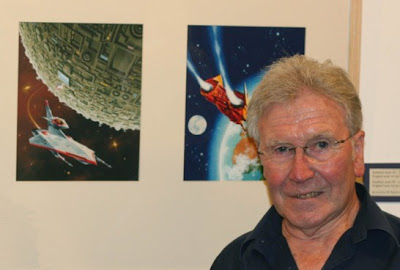 Also in attendance at the opening were Starblazer artists Ian Kennedy (shown above with two of his covers), Keith Robson and Colin MacNeil and the exhibition includes original cover artwork from Kennedy and Robson as well as prints of some of MacNeil's covers. A total of 13 Ian Kennedy covers are on display, from the real world Sphinx at Giza on the cover of Pyramid Power, issue 58, via the humorous science fiction of The Robot Kid, issue 204, to the fantasy of The Triune Warrior, issue 271. Many of the pieces of original Kennedy art on display were reprinted in the 2009 Starblazer Calendar including the spaceship cover of The Lost Planet, issue 33. Speaking during the exhibition's opening, Ian Kennedy voiced the thoughts of many of those around him when he looked at his paintings, owned by DC Thomson, and said that he would like to take some of them home with him. 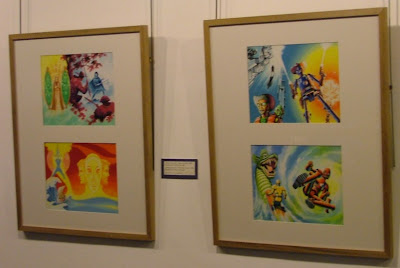 Keith Robson's intricately detailed spaceships take up much of the opposite wall with 9 covers on display while the rather more western themed cover for Galactic Lawman, issue 56, shows his love of the old West. They also give an indication of the breadth of Robson's art style as those of us at last year's Beano exhibition remember his colour Beano artwork hanging on the same wall. 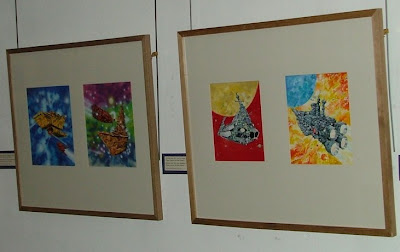 Colin MacNeil's covers are represented by prints including an enormous one of the final published cover, The Enchanted Helmet issue 281. In addition the exhibition has a selection of other covers by artists including Mark Gorton, Ron Brown and Alan Burrows as well as a beautifully detailed painting used for the cover of issue 188, The Infernal Triangle, by Jose Casanovas Jr. While he may be better known for his black and white interior artwork for Starlord and 2000AD, based on this one painting I would certainly like to see a lot more of his painted art. 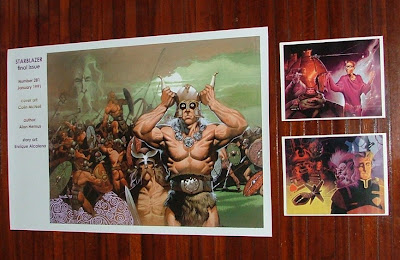 The exhibition cabinets contain many issues of the publication and examples of its black and white interior artwork with a lot of original art from Argentinian artist Enrique Alcatena. There are also several original scripts and production copies of artwork plus the two recent Starblazer spin offs - the Starblazer Adventures role-playing game book from Cubicle 7 and the Starblazer Calendar from Unique Comic Collectables. 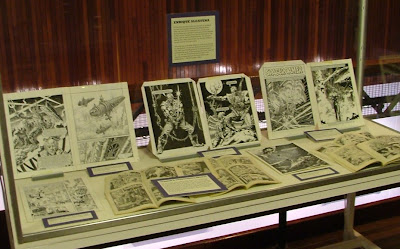 The Lamb Gallery was where the Beano 70th Anniversary exhibition was held last year. In comparison to the enormous artboards used for the Beano artwork, the smaller size of the Starblazer artwork is not quite as striking on entering the gallery, but the sheer detail on the artboards and the brilliance of their colours even after three decades means that this exhibition is an impressive reminder of a much loved title.

The Starblazer exhibition is open Monday to Saturday until 22 August 2009 at the Lamb Gallery in the Dundee University Tower Building which is a short walk from both Dundee's train and bus stations. Entrance is free.

There are more details on the Lamb Gallery website.

Posted by Jeremy Briggs at 5:44 pm