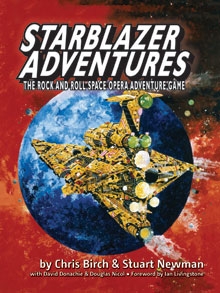 Mention DC Thomson's Starblazer to some and you will either get a look of nostalgia, or, from others, perhaps a slight look of confusion. From 1979 to 1991, through 281 issues, this anthology title took its readers to new galaxies, to read about the adventures of Space Police, Mad Scientists and Evil Robot Geniuses. Characters such as Mikal R Kayn, Cinnibar of The Star Corps, and The Suicide Squad thrilled countless readers with their episodic adventures.

Starblazer Adventures, as well as being inspired by the DC Thomson title, also includes a section on its history of the comic, which if you’ve never heard of it -- and I'll confess, I had the title confused with memories of New Eagle - helps a lot. Now all you are need is a minimum of three players, some six sided dice and your own imagination, plus of course this book!

The publication of Starblazer Adventures is apt, with 2009 marking the 30th Anniversary of the release of the first issue (also marked by an exhibition of artwork at the University of Dundee). At 600 plus pages long this is certainly a large book but it is packed with sufficient information to make up at least one core rule book and two sourcebooks.

Chapters enable you to design your own universe, including spaceships, weapons and alien civilizations, even planets and galaxies, which can all be found within. Its glossy, bright and slightly retro hardback cover enhance its nostalgic appeal.

Using the recently-released Fate 3.0 system the rules require that players design their characters using aspects, which are the personal qualities they believe their character would possess. These include Skills, which include piloting, repair and firing laser weapons at giant Space Bats; Stunts, which grant a temporary bonus to skills but may cost Fate points.

(If any of this all sounds a little confusing, don’t worry, as there are examples throughout the book for Gamesmasters, or Story Teller, to use).

If you're a regular roleplayer but have never used the Fate system before it can seem a bit daunting at first, but stick with it -- it makes for some strong roleplaying once your character is up and blasting!

The book is well designed and uses a lot of artwork from the comic to help set the scene. There are also stats for some of the characters that I mentioned earlier, so if you have ever wanted to be a member of the Star Corps and fight alongside your favourite character, now is your chance.

As well as the book, the game's website - www.cubicle-7.com/starblazer.htm - has forums to help if you have any queries, and answer any rule discrepancies (and there are bound to be some!) that you might notice can be sorted out there. In addition, there are downloadable character sheets and reference guides for organizations, ships and any extra characters you may need.

Personally speaking, this would be a great game to run with a group of like minded friends. However to get the most out of this game requires dedication as there is a lot of information contained within.

In conclusion, Starblazer Adventures is a fantastic game and the retail price of £34.99 offers great value of money. If you're a fan of Starblazer or simply and SF RPG fan, give this a go: we don't think you will be disappointed.

• The 160 page Mindjammer supplement is due to be released in November with further supplements due in 2010. Mindjammer has its own dedicated website at www.mindjammer.com
Posted by John Freeman at 10:08 pm