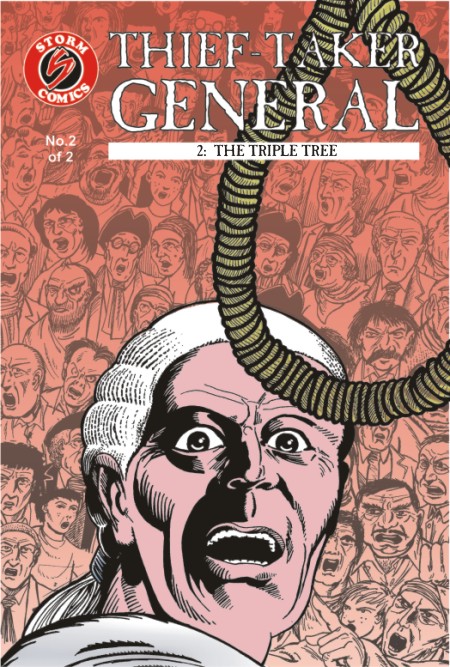 Sheppard was a petty thief who has gone down in legend for his many daring and seemingly-impossible escapes from some of the city's most notorious prisons. Wild was the self-proclaimed Thief-Taker General of Britain who both sold captured felons on to the courts and employed them into his own criminal network.

Issue 2 follows the fates of these two men. Sub-titled The Triple Tree, this refers to the three-sided hanging posts of Tyburn, execution capital of Britain.

Like issue 1, and the SF tale Afterlife before it, this is a 32-page black and white comic with colour cover. The two previous titles are still retailing at £2.25 each plus p&p though to cover costs issue 2 sells at £2.50. However all three Storm Comics titles can be bought in one fell swoop for £8.00 inc. p&p, a saving of £1.25.

"Sales of these titles have been slow but steady and judging by the emails, interest is good," writer and artist Michael Crouch tells downthetubes, who has also been busy with some contributions to the Temple APA #4 which will be available on line soon. "All in all things are going prety well."

• Visit Storm Comics at www.stormcomics.com to order copies of Thief Taker and Afterlife
Posted by John Freeman at 9:41 am