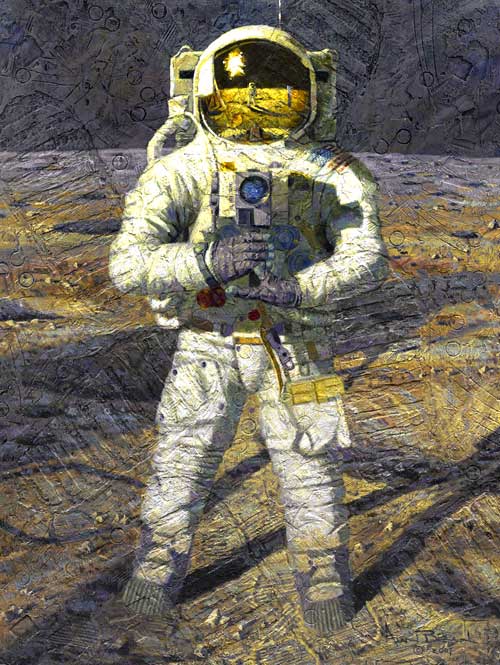 Next month is the 40th anniversary of the first Moon landing (20th July 1969). We're already planning some special posts to mark this occasion, since the moon landings (and indeed, space exploration in general) has inspired many of our readers and the British comics we grew up with (2000AD, TV Century 21, Eagle and Countdown, just to name four).

As a result, we're appealing to comics artists and illustrators to help mark this major anniversary for space exploration by offering art inspired by the moon landings and space exploration which can then be added to this album in our forum - http://downthetubes.ning.com/photo/albums/moon-landing-40th-anniversary - which will then be presented on the main downthetubes site to mark the anniversary.

The idea is that this is not just a celebration of the Moon landing but also an opportunity to present a portfolio of themed work based on space and space exploration (real or imagined) that should generate press interest given the upcoming anniversary.

By “inspired by”, we mean this loosely, as long as there’s a “space” aspect to the submission. Some of you reading this will have grown up watching the moon landings and perhaps inspired by them to become an artist. You may simply have drawn adventures that have taken place on the Moon. So if you have art featuring a space hero or heroine we’d say that was ideal for this – just let us know what © info should be included, and please make sure you send me a web link if you have one. (I know folk are busy and may not have time to do something specific or new).

The album will then be “embedded” on the main downthetubes site to mark the anniversary (and, indeed, can be embedded on any web site, so you could feature it on your site, too).

Any art - illustration, strip, cartoons – welcome. If there’s a strong response to this, we may also do a MyEbook version.

Text pieces are also welcomed: we're not quite sure how to present those yet, perhaps in another part of the downthetubes forum. We don’t want writers to be left out.

If you don't want to join our forum and upload art but would like to join in with the celebrations, simply send your work to johnfreeman6-moonlandinganniversaryart@yahoo.co.uk. Please ensure images are no larger than 2MB in size.

• The image above is a painting by Alan Bean and shows how Neil Armstrong would have looked (since there are no photos) while taking his iconic photo of his lunar companion, Buzz Aldrin. This painting is a mirror image of the First Men - Aldrin painting held in Washington's National Air and Space Museum which will premiere Alan Bean: Painting Apollo, First Artist On Another World at the Museum on the National Mall July 16, 2009 through January 13, 2010 in conjunction with the 40th Anniversary of the first Apollo Moon landings. Image © Smithsonian.
Posted by John Freeman at 4:18 pm