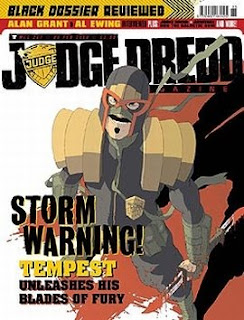 • Occasional downthetubes contributor Matt Badham talks to 2000 AD, Marvel Heroes and Judge Dredd Megazine writer Al Ewing in an interview recently posted at the Forbidden Planet International blog. "I’m probably proudest of the comics I’ve written for kids," he reveals. "There’s something joyous about writing a comic for an eight-to-twelve year old - it just feels free. Liberating. It’s nice to have something that’s just straight fun, without necessarily tying into anything or leading on to or from anything — something that anyone of any age can pick up and enjoy." Read the full interview here

• Speaking of the FPI blog, they're also hosting a series of behind-the-scenes essays from up-and-coming cartoonist Oliver East about his new graphic novel from British indie publisher Blank Slate, Proper Go Well High. The book is just the latest in the artist's Trains are...Mint series, all travelogues that document various walks East has taken.

"There are a lot of nods to Americana in the book,' writes East, discussing aspects of his process and the book, including his fascination with Americana: 'from water towers on top of buildings that you just don’t get in England to barn architecture. I’ve tried to keep them to a minimum but your mind wonders on these walks and I regularly fantasise about doing a Trains Are…Mint Stateside.' Read part one here, part two and part three here 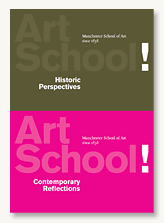 • Meanwhile, those readers who want to get a taste of Oliver East's earlier work, could do worse than to hotfoot it to Manchester, where a new exhibition featuring some of his early work. Art School! - Historic Perspectives is a vibrant exhibition exploring student artwork from the Manchester School of Art archive at the School itself, spanning the history of the School since 1838. It's the sister exhibition to Art School! - Contemporary Reflections, which was recently held in the Holden Gallery and some of the faculty work exhibited there will shortly be on show in the Special Collections Gallery. The show also features artwork by famous alumni such as Martin Parr, Liam Spencer and Oliver East.
• The exhibition runs until 21st August 2009, open Mon-Fri 10am-4pm, Thurs 10am-7pm (term-time only). More information on the Special Collections web site

• And talking of events, comics guru Paul Gravett reports two Comica events next month in London. Alan Moore and Kevin O’Neill will be at the ICA in The Mall on 2nd June, discussing the first part of their new League of Extraordinary Gentlemen tale, Century: 1910, in which the League plunge into the brave new 20th century, with Carnacki the ghost-finder, Raffles, Pirate Jenny, Mac the Knife and more. The creators will be exploring their series' vast referential cosmos with popular culture guru Christopher Frayling, rector of the RCA. That event kicks off at 6.45pm and there are more details here on the ICA web site.
Then, on 20th June, the ICA plays host to a discussion of "La nouvelle bande dessinée", a comics movement which has swept through French comics. Now, two of its most dynamic members are translated into English. Émile Bravo draws My Mommy, about a boy’s yearning for his mother, and revives Belgian classic Spirou, while Emmanuel Guibert chronicles one GI’s experiences in Alan's War and works with photographer Didier Lefèvre to record a mission in Afghanistan in Doctors without Borders. Both will be in conversation with Comica’s Paul Gravett, and will sign books. More details here

• And finally for this round up... Paul Cornell - comics writer, Doctor Who writer and avid cricket fan - has been promoting some new pages drawn by Adrian Alphona from an upcoming issue of Captain Britain and MI-13 in which the heroes are seen playing the game. Given how Britain has at times been portrayed in US comics (although not, we stress, in this title!) "I'm just hugely flattered that these guys put the effort in to make the game look so spot on," says Paul. You can view the pages here on his blog.
Posted by Matt Badham at 8:00 am