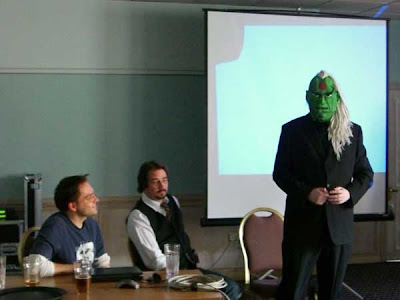 The 2000AD panel at the Expo, which included an appearance by Tharg. Photo: David Baillie (no, not that David Bailey)
Kev Sutherland, who began the Bristol Comic Festival back in 1999 but is now better known for his comics workshops for schools and other organisations and his work with the Falsetto, kindly agreed to let us run his report on this year’s Comic Expo in Bristol.

For a very different view of the event, read David Baillie's report on the main downthetubes web site...

Firstly, I need to say I didn’t get to the Expo itself on Saturday at the Ramada Hotel – although I did get into the Small Press event at the Mercure. The main Expo itself which was sold out in advance so, according to the website, nobody was going to be able to turn up and get in on the door. I also hadn't been sent an invitation as a guest, which I'd kind of got used to expecting (apart from enjoying 21 years in the business as a professional comic writer and artist, I was also the reason the Comic Expo takes place in Bristol in the first place, having created it as Comics 99 and run or co-run it until 2004).

Frankly, I couldn't face the possible indignity of having to face a stranger at the front desk and run the risk of coming out with the phrase "don't you know who I am?" so I gave the daytime event a miss.

The impression I got at the bar that evening was that I hadn't missed much. The photos of the exhibitors seemed to be familiar publishers from the previous year, but fewer in number. The most exciting material had always been on the Small Press tables, and those I'd already enjoyed round the corner at the Mercure. But it seems that the down-sizing of the event, losing (through circumstances beyond the organisers' control) the Empire & Commonwealth Museum hall has had a very damaging effect. Without the bulk of traffic that comes with an event open to browsers, and without the Small Press benefiting from proximity to the big boys and vice versa, most people sold less stuff. I wait to be corrected on this, but certainly every person I spoke to who was trying to sell their wares sold less of them that at any previous Bristol show.

[Editor's note: Some small press publishers such as Orang Utan Comics report they sold more of their books than at any other past Expo]

Other items, like the Charity Art Auction and Awards ceremony, were also missing, but maybe I'm the only one who thought they were needed in the first place.

In terms of comic finds I bought (or was given) a few comics, the very best of which was Laura Howell's Tales From The Crust: she's a genius of whose talent I am actually jealous. The Goodman Brothers' Square Eyed Stories 22 and The Banal Pig Landscape Anthology came a close second, the rest were all brilliant – because all comics are in some way or another.

Anyway, as always, the Saturday night's drinkathon with fellow comics professionals proved the high point and this year, apart from the aforementioned brief visit to the Small Press event, comprised my entire con. I spoke drunkenly and endlessly with far too many people to recount. Possibly my favourite conversations were with Simon Bisley (possibly the first time we've ever spoken, what a brilliant bloke) and Glenn Fabry (one of those very drunken "you're my best mate" conversations that everybody loves), and I confess I got a little buzz from those people who would insist on mentioning how much better it was in my day (selective memory is a great thing, much of my event-running left a lot to be desired).

As Britain’s longest-running annual UK comic convention, which has taken place in Bristol since 1999, the fact that this was the event's 10th anniversary, this sadly went uncelebrated. There’s also more bad news: the continuing poor economic climate means next year’s event will not have the benefit of being in the Commonwealth Museum hall, either.

I'd imagine would this year's exhibitors who might think twice about paying for a table again if they face the prospect of such low sales, effectively making the Expo more of a mini-con than a Con, I fear.

It seems our ambitious plans to make Bristol as big and expansive, perhaps as impressive as the French Angouleme Festival, are all over. Birmingham, the baton passes to you…

• The next Comic Expo will take place 22 - 23rd May 2010 at both the Ramada and Mecure hotels, Bristol
• Official Web Site

For a very different view of the event, read David Baillie's report on the main downthetubes web site...

• Scattering of pictures from the Bristol Comic Con by Danacea
• Mike McKone sketching Blink at Bristol
• Andie Tong sketching at Bristol
• The Huzzah! artists say hello
• Jock sketching for Ang
Posted by John Freeman at 12:21 am

Having read this report I feel moved to comment with my publisher hat on for Insomnia Publications.

In terms of sales, all I can say is that our experience was out of this world. We sold 150 copies of Cancertown (just over 200 books total)in one day at the expo and that is a full length OGN! We actually had queues at the table.

Far from being a lifeless washout it the more intimate nature of the hotel surroundings meant that talking to creators about pitches, portfolios or works in progress was much easier.

Credit may be crunching elsewhere, but comic fans remain a charitable lot and we also managed to raise a decent amount for Draw The World Together.

The more intimate nature of the hotel surroundings meant that talking to creators about pitches, portfolios or works in progress was much easier.

As it was smaller there was much more thought went into a lot of the small press stands I think, with many interesting things taking place.

While the con was a physically smaller event this year with less dealer tables, I really don't think number of creators / publishers was down at all.

There seems to be so much gloom in the industry at the moment. Put on your happy faces - the indie scenes is bursting at the seams with talent, the ways to get your work out are more and easier and cheaper than ever. Go make some art and have fun!

Mike Alwood (on the Ramada side) and Mal Smith (on the SPEXPO side) did a fantastic job at organising the weekend, and no one would have guessed Mal only had 3 months to put her side together.

Thanks to everyone involved, organisers, visitors and creators. It was a fantastic weekend - and here's to many more.

Over on my Facebook page, Rufus Dayglo had this to say:

"Hmm Interesting report... I have to admit..I've missed the last few Bristol shows as I've found them pretty repetitive, and definitely a case of diminishing returns...

"I have very happy memories of the early Bristol shows at the Waterfront shed (Or whatever it was called)..but ! also remember the acrimonious decline of the transfer of management..

"The Birmingham shows are fantastic, and I genuinely have a superb time, and Shane [Chebsey] does such an amazing job... truly a star!

"We're very lucky to have some brave souls willing to even contemplate putting on a convention..it's a thankless task.. so, belatedly..Thank you to ALL involved."

So it was smaller event but that is due to the prudent organisational skills of the amazing Mike Allwood. Previous organisers always seem to say how great their shows were but then go on to say how much money they lost in the process. Great that they were up for doing shows but Mike seems to have nailed the best way forward. The show was sold out. If that isnt an indication of success I dont know what is. Can I also say a big thanks to Nik, all at Insomnia, Orang Utan and the many artists who helped out with 'Draw the World Together'. We raised £700 pounds for charity which in countries where children live on or below the poverty line that will make a huge difference.
History shows that comics do not seem to warrant or justify huge conventions in this country. Having something the size of this years Comicexpo that worked and came in within budget is great. Long may it continue.
andrew wildman | www.drawtheworldtogether.com

I didn't make it to this year's event, due to the limited number of advance tickets. While I have heard good reports of the event, I can't help but feel that having the UK's foremost mainstream event so closed to new attendees is not an outcome we could wish for.

I also wanted to comment on Kev's claim that Bristol is 'Britain’s longest-running annual UK comic convention, which has taken place in Bristol since 1999'. Surely he means 'longest-running mainstream convention', as of course Oxford's CAPTION convention has been running since 1992.

Well, I'm rather pleased that the account of our bumper sales at the Orang Utan Comics stand this year was included as a counterpoint to Kev's negativity. Kev himself points out that he didn't actually attend the show, but just "heard" that it wasn't so great this year. Well, take it from someone who was actually there and sold more comics than I've sold at any other convention I've attended as a publisher - the venue may have been smaller, but in every way that counts Bristol was bigger and better than ever! The split venue worked incredibly well and ensured that the Sunday wasn't the usual completely dead day for sales. In fact, if anything, there was more of a buzz on Sunday than there was on Saturday.
Size isn't everything, people, and at this year's Bristol I felt that the emphasis was on quality, rather than quality. As Nic said, the atmosphere was much more relaxed, and it was a lot easier to chat to visitors to our stand than in the sweaty and noisy old train shed.
Seriously, I can't praise the organisers enough, and I'm looking forward to next year's Bristol even more.

I think kev is remembering his own organisation of the event through rose coloured glasses although he deserves great credit for bringing the event to my home town.

Every year Mike Alwood does his best to put on a good show and this year was no exeption. Dan Didio panels alone were worth the entrance fee.

The reduced size was a realistic reaction to economic circumstances and did't detract from what is always one of the high points of my year.

I'd encourage anyone thinking of attending next year to do so you won't be disappointed.