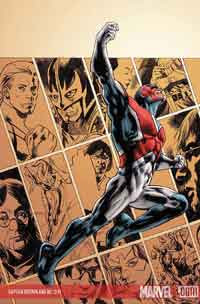 "As you may have noticed, there’s no solicitation today for #16 of Captain Britain and MI-13," he notes on his blog. "That, unfortunately, is because #15 is the last issue."

There had previously been unfounded rumours of the book's cancellation, but with estimated sales of just over 17,700 for #11 (see icv2), the well-received title may have been gaining deserved critical acclaim but not the sales needed to keep it afloat.

Thanking fans of the book and its various creative art teams, especially Leonard Kirk, Paul held out the hope that it’s entirely possible his working relationship with him was not over, indicating Marvel still had scripting work for him in the pipeline.

"One of the lovely things about this book is watching everyone step up, from colourists like Eager Beaver Brian Reber and Canny Christina Strain to our many talented inkers and letterers," Paul enthuses. "Maybe it’s the effort it takes to make the British visuals work that does it. It’s been a delight to see so many people taking their work so seriously."

Paul also insists that the book coming to an end now isn’t a revelation that earlier rumours the book had been cancelled were "true all along.

"If it had been true then, I’d have told you then," he says. "I think that controversy, and the extremely welcome reaction from fans, ended up doing a lot of good."

The good news is, there may yet be more Captain Britain from Paul, who says he has enjoyed writing a monthly comic more than almost anything else he's done as a writer. "While we didn’t know this would be the last arc until comparatively recently, I had it in mind that it was possible it would be from the time I started plotting it," he reveals. "Indeed, the end of this arc marks the end of what I had planned for the book when I started. One of the images right at the finish is what I always felt I was heading towards, and I’m very pleased I got there.

"So: you will get a real, thorough, proper, ending, not just of [storyline] ‘Vampire State’, but of the whole run. It hasn’t been rushed to fit the space, it hasn’t been compromised, it won’t just suddenly cut off: it’s what I intended. I think the Annual and the two remaining issues finish off one of my best stories in any media, and that story is actually the entirety of Captain Britain and MI-13... This is a comic with a proper ending."