• (via Matt Badham): Space war story Insurrection is currently wowing all those Earthlets who pick up Judge Dredd: The Megazine every month - with many suggesting that it might be one of the best series the Megazine has ever produced. John Burdis caught up with writer Dan Abnett to find out more. "The actual brief was to bring to the Dredd Universe something of the epic war-in-space scale of the stuff I write for Warhammer 40K," Dan reveals. "Tharg (Matt to his friends) wanted a stonking big space war story that would suit the universe of the Mega-Cities. I was happy to oblige..." The full interview features on 2000AD Review here

• Thomas Cochrane informs us a new chapter of his fabulous tortological time travel tale Fat Man strip is now available via MyEBook.com, introducing the fabulous Louise Brooks as a character. Thomas is also launching an online comic strip Soap Opera on 1st April called The Queen of Spades, a modern version of Pushkin's classic. Described as a live action comic book, find out more about this dark tale of murder, madness and satanism via facebook...• (via Warren Ellis): Rudy Rucker’s webmag of weird fiction and stuff, FLURB (www.flurb.net), has reached its seventh iteration, with an excellent line-up including 2000AD creator Kek-W, Richard Kadrey and Simon Logan. FLURB is rarely less than fascinating. Go and read, all for free.

• After months of talking about it, Jon Haward and Andie Lines have launched their new web strip, the amazing interplanetary travels of Joe Gravity and his friends in their first adventure called Gravity Quest. "It's a new kid friendly blog strip," says Jon. 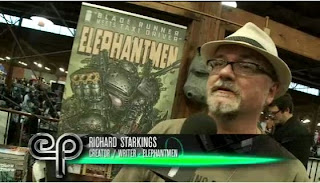 • Former Marvel UK Bullpen boss Richard Starkings got the opportunity to enthuse (as well he should) about Elephantmen on Electric Playground recently: catch the interview via this link, about two-thirds in...

• Jim Boswell has a two-page strip featuring Wayne Rooney in the latest issue of footie mag Kick!, on sale now in all good newsagents!
Posted by John Freeman at 11:48 pm