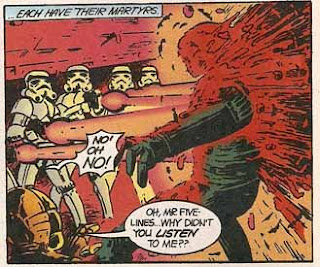 • Lucasfilm has published a feature on Dave Gibbons and Alan Moore’s connections to Star Wars, documenting the pair's early Star Wars work. Alan wrote several Star Wars tales for Marvel UK while Dave's first contribution was as an artist on the second set of Star Wars Galaxy cards from Topps. Moore's Star Wars contributions went largely unknown outside the UK until the mid-1990s, when Dark Horse Comics collected them into a two-issue limited series, Classic Star Wars: Devilworlds. Pictured here is a frame from the story Rust Never Sleeps.

• The Guardian reports a man dressed as Batman villain the Joker has been shot dead by police in America after pointing a loaded shotgun at them...

• The splendid fellows at Doctor Who podcast Radio Free Skaro have posted up an MP3 interview with Simon Guerrier, conducted at the Gallifrey convention in LA last month. "Hear me stumble my way towards the articulate without ever quite getting there," says Simon.

• As part of the Bradford Laisterdyke Business & Enterprise College's innovative mini-literary festival and literacy promotion event Leap Into Books, Tony Lee will be doing two days, Wednesday 8th and Thursday 9th April at the college. Also as part of the evening programming, he'll be live on stage at the Bradford Playhouse on the night of Wednesday the 8th from 7.30pm - 8.30pm, doing a 'one man show' for the more mature comic reader. The He's Only a Writer event is at 7.30pm-8.30pm, Wednesday 8th April. Tickets are £5.00 (£3.00 concession) and are available from the Playhouse Box Office (01274 820666), or online from www.leapintobooks.org.uk (payment is either using Paypal or personal cheque)

• The upcoming Cold Day in Hell collection of early Seventh Doctor Who stories from Panini, out in May, will include a background feature on the 'making' of the stripsincluding interview material with Lee Sullivan, Ricard StarKings, Mike Collins and others. (I know this because I just filed it...) Richard Starking also provides an introduction to the volume.

• More Watchmen "and I know there’s been plenty of those around recently, but I think this one is a bit different," says Forbidden Planet International's Joe Gordon. New York writer Tom Crosshill kindly offered FPI a combi review/interview piece on the Watchmen: Portraits book after he met the photographer Clay Enos at the MoCCA Art of Watchmen exhibition and interviewed him. "I know some folks were less than impressed with the idea of that book but I thought it had some gorgeous photography and I like the fact Clay avoided Photoshop in the work," says Joe. "There’s plenty of gorgeous, luminous black and white photos to enjoy in the article too." Read it here

• Jim Boswell has posted pages of his Michael Owen strip from Kick! that is on sale now in the UK.

• (with thanks to David Hughes) Hungry? This won't help but it's worthwhile swinging by Rob Jacksons website as a matter of regularity, his work on a Pasty Anthology is continuing apace with a great planet of the apes painting, erm with a twist. The anthology is based around Greggs Pasties - the food of modern Britain. "The story of Greggs is a Viz style tale of the centuries of loyal service done for the people of Britain by the bakers, and lots of other stuff about pasties too," Rob explains. Small press at its best, although my favourite food-related comics idea was one from former Fantasy Advertiser editor Martin Skidmore who, when asked to contribute a recipe to a fanzine wrote soemthing along the lines of: "Get Some Money. Go To a Fish and Chip Shop. Buy Fish and Chips. Eat Them." Priceless...

• And finally on Comic Relief Day, over on Bear Alley Steve Holland has uncovered a classic comic-styled cookery book from Disney: Cooking with Pooh. No, really...
Posted by John Freeman at 3:52 pm